Mike Tomlin may or may not be a fan of Game of Thrones, but he does certainly seem to believe in bloodlines. The Pittsburgh Steelers have come to terms with free agent fullback Derek Watt, brother of starting outside linebacker T.J. Watt. 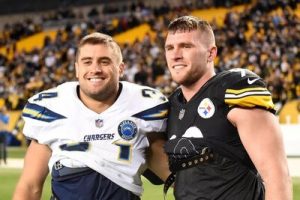 Joe Rutter of the Pittsburgh Tribune-Review reports that Derek Watt signed a contract worth 9.75 million dollars that runs for three years. While few expected the Steelers to use their precious salary cap space to sign a fullback, Derek Watt also was a special teams stand out for the Chargers and could fill the void left by the mildly surprising departure of Tyler Matakevich who will bolt to the Buffalo Bills once the free agent signing period officially begins.

As Roy Countryman from Steel City Insider Points out, the Chargers under utilized Derrick Watt’s pass catching abilities and suggests he could do double duty at tight end.

Another player who might be be looking over his shoulder is Roosevelt Nix. Nix is a fullback and was captain of the Steelers special teams last year, and is due to count 1.8 million against the salary cap this year.

All in the Family

Derek Watt’s arrival in Pittsburgh gives the Steelers their second set of brothers, as Terrell Edmunds and Trey Edmunds are also on the current roster – at the moment. Trey Edmunds is officially a fullback so his roster spot is threatened by Derek Watt.

In addition, Mike Tomlin hasn’t been shy about how Devin Bush’s family lineage attracted him to the linebacker. Likewise, Benny Snell also has an uncle with NFL experience.

As expected, the Steelers applied the franchise tag to Bud Dupree, and to make room for Dupree they waived Mark Barron, Anthony Chickillo and Johnny Holton, while resigning long snapper Kameron Canaday to a two year contract.

The McDonald restructure is the most interesting, as it signals he will return to the team, something which had been in doubt. That move in turn makes it more likely that Nick Vannett will be allowed to depart as a free agent.