Neither has ever had a reputation for being very chummy with their teammates or all that connected to the fans. Then there’s the deal with the media and both seemingly telling reporters what they probably thought they wanted to hear at the time. 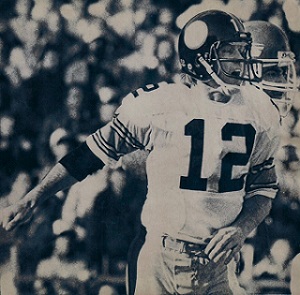 And what about Terry Bradshaw’s admission that he contemplated retirement shortly after the Steelers won their fourth Lombardi trophy in six years thanks to a 31-19 victory over the Rams in Super Bowl XIV? That sounds an awful lot like Roethlisberger’s months-long flirtation with retirement following the blow-out loss to the Patriots in the 2016/2017 AFC title game.

I got a sense of just how eerily similar those elbows were about a month or so ago when stories first surfaced that Ben Roethlisberger, who missed all but six quarters of the 2019 regular season after undergoing major elbow surgery, was scheduled to start throwing tennis balls as one of the first steps in his rehab.

As it turned out, Ben Roethlisberger was ahead of schedule in his recovery and after a visit with the doctor who performed his surgery, he was cleared to begin throwing footballs once again in late-February.

And when you read things from Ben Roethlisberger, such as his current throwing regimen, which he discussed in a recent interview with the Pittsburgh Post-Gazette’s Ron Cook, it can only give Steelers fans hope and optimism that he will be back to close to 100 percent by the start of the 2020 regular season.

I had thrown a Nerf ball a little bit before to my kids in the living room and my arm felt pretty good. I knew it was going to be OK.

But still, it felt so neat to throw a football. It had been a long time. I guess it was like riding a bike a little bit. You get back on and go. It’s not like it had been a year. It has been months. I never throw much in the offseason, anyway, so I looked at the time I had off like it was my offseason.

Ben Roethlisberger also said in the interview that he’s throwing about 40 passes a day at a distance of 20 yards and he’d like to ramp things up in the near-future.

Terry Bradshaw knows a thing or two about having major elbow surgery late in his career, and he shared his thoughts with Steelers beat writer Ed Bouchette of The Athletic in a recent interview.

“Yeah, in the back of his mind, he’s 38 now,” Bradshaw explained  toBouchette. “He has to say to himself, ‘OK, take care of this thing.’ Don’t come back until you’re 100 percent strong and you can make all the throws and there is no pain, etc. I feel like that’s what’s going to happen. I’m hoping that he’s fine. But I can’t say; I’m not there. I don’t know. I haven’t talked to him, but it’s an elbow injury.

Let me say this: Under proper supervision, I would expect him to come back strong.”

Back to those tennis balls. For whatever reason, it took me back to the early-’80s and Bradshaw’s attempt to come back from the elbow surgery he had prior to the 1983 regular season.

According to Myron Cope, the late, great Steelers radio color analyst, Bradshaw was quite optimistic that offseason and told Cope that, among other things, he was throwing 40, 50 and even 60 yard passes.

Myron Cope, a colorful character who was also a reporter for Channel 4 and had his own nightly sports talk radio show on 1250 WTAE, went as far as to arrange a meeting between Bradshaw and a Myna bird with mysterious healing powers. That’s right, in a segment that aired on Channel 4 Action News some time in 1983 during Bradshaw’s ongoing attempt to heal his elbow, this Myna bird sat on Bradshaw’s right arm and “infused” him with his “healing powers.”

Don’t believe me? Relive the moment for yourself:

Obviously, if you know anything about both Terry Bradshaw and the late Myron Cope, you realize this was done mostly for entertainment, but make no mistake, Bradshaw really was searching for answers.

After sitting out most of the regular season, Bradshaw did attempt a comeback late in ’83. He started the next-to-last game of the season against the Jets at old Shea Stadium (the last Jets game ever played there). He played the first half, throwing two touchdown passes in the process, before pulling himself from the game after aggravating his elbow while throwing his last touchdown pass to Calvin Sweeney.

You might be saying, “Well, that was the early-’80s. We’ve come so far since then in terms of medical advancements.” 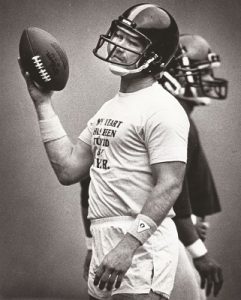 Maybe, but Myna birds aside, the early-’80s probably seemed far more advanced medically from what they were 20 or 30 years prior. Bradshaw, who was in his mid-30s at the the time–not 38–probably thought it was just a matter of time until he was fully recovered.

So am I saying Ben Roethlisberger will face a similar fate to that of Bradshaw’s 37 years ago?

No, but the current rhetoric being thrown around–the verbiage–about Ben Roethlisberger’s training and where he’s at in the process (save for the Myna bird, of course) is strikingly similar to what fans were hearing about Terry Bradshaw’s recovery in the spring of 1983.

Will Craig Wolfley, the sideline reporter for Steelers radio broadcasts and the closest thing to Cope, have to arrange a meeting between Roethlisberger and some animal with mysterious powers later this year (maybe even during the regular season)? Unlikely, but one never knows.

Terry Bradshaw, and his futile attempt to come back from major elbow surgery, taught me that 37 years ago.