“The Steelers must improve at cornerback.” The statement was a key takeaway from the loss in Super Bowl XLV. It got repeated at the beginning of each and every off season for the rest of the decade. Here’s why:

During 2019, Steelers fans enjoyed the best cornerback play that they’ve seen since the heyday of the 2nd Super Bowl era of the ‘00’s and perhaps beyond. But does that mean they can ignore cornerback in the 2020 NFL Draft? 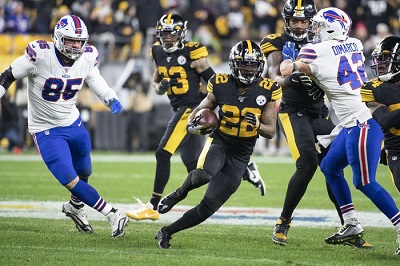 The Steelers pride themselves on building through the draft, but two free agents, Joe Haden and Steven Nelson, gave the franchise its best cornerback tandem since Ike Taylor and Deshea Townsend lined up in Super Bowl XLIII.

Being true to their nature, the Cleveland Browns inexplicably cut Joe Haden in August of 2017. The Steelers snapped him up immediately, made him an instant starter, and haven’t looked back since. A quick look at the stat sheet shows why:

In his first season Joe Haden had 1 interception. In his second he had 2, but one came against the Patriots. In his third season he had 5 interceptions while defending 17 passes.

The Steelers turned heads a year ago when they made him their biggest free agency signing in franchise history. After that, you didn’t hear the name “Steven Nelson” very much on Sunday afternoons. At most positions that would be an indictment, but in Steven Nelson’s case, you didn’t hear his name because he was shutting down his side of the field.

Mike Hilton is classic Kevin Colbert find, winning the job as a rookie and turning in an exceptional strong performance during the 2017 season. Hilton endured a bit of a sophomore slump in 2018, but bounced back in 2019 when he batted away 11 passes, intercepted a pass, recovered a fumble, and recorded a sack and half.

Cam Sutton is the Steelers “next man” up at cornerback, and Sutton brings an interesting, if uneven past to his fourth year in the league. The Steelers drafted him with their third round pick in the 2017 NFL Draft and Sutton drew praise during preseason. Injuries forced him to start the season on injured reserve, but the Steelers activated him late in the season against Cincinnati, in the December match up where Ryan Shazier’s career ended.

That push never materialized. Sutton played in all 15 games, but was never really a factor. Sutton bounced back and authored a strong 2019, often rotating in for Hilton on 3rd downs. Sutton defended 5 passes, had an interception and recorded a sack.

After Cam Sutton, the Steelers have Justin Layne, the cornerback they picked in 3rd round of the 2019 out of Michigan State. Justin Layne is a graduate of Cleveland’s Benedictine High School, just as Chuck Noll was.

That pedigree didn’t help Justin Layne find the field as a rookie. By all accounts he struggled in training camp and appeared in 10 games a rookie.

If it’s a draft, the Steelers must be looking to draft a cornerback, right? For 10 years that has been the conventional wisdom, although the Steelers have only used 4 premium picks on cornerbacks. Yet, the Steelers will enter this year’s draft without clutching their rosary beads in hopes that a hot prospect at corner falls to them.

That’s tempting, and the team certainly has other needs. But if Kevin Colbert and Mike Tomlin find themselves staring at a top corner who has fall, they need to think twice about passing because Joe Haden is turning 31 while Mike Hilton and Cam Sutton will be free agents next year.

With that said, Ben Roethlisberger is 37 and coming off of elbow surgery. So the Steelers focus should be on players who can help win this fall first, and future falls second. Given that the Steelers needs at cornerback heading into the 2020 NFL Draft should be considered Moderate-Low.