Quarterback is every NFL team’s most important position. This has always been true, but it is more true today than it was even just two decades ago.

That changed 6 quarters into the 2019 season. Suddenly, Steelers fans who were 30 something or below got a taste of what it was like when the likes of Cliff Stoudt, Mark Malone and David Woodley stood under center.

But does that mean that the Steelers will or should look to quarterback in the 2020 NFL Draft? Let’s find out. 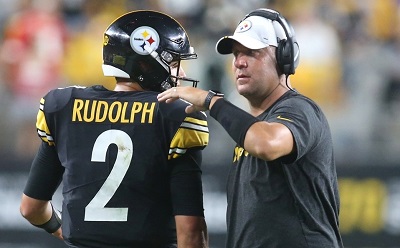 The Steelers haven’t suffered a losing season since calling Ben Roethlisberger’s name in the 2004 NFL Draft and have only entered the season’s final week without the possibility of making the playoffs once in that time.

Was that his injured elbow? Was Roethlisberger rusty from lack of activity during the preseason? We don’t know and will never know. We do know that he is 38 and coming off of elbow surgery, and that his rehab is a bit ahead of schedule. We also know that he enter training camp and the season as the Steelers starting quarterback.

Mason Rudolph stepped in when Roethlisberger injured his elbow against the Seahawks. How well Mason Rudolph played is open to debate.

Mason Rudolph’s progress was marked in fits and starts. He seemed to be finding his footing when a concussion against Baltimore sidelined him. Rudolph was shaky on his return but found his self-confidence midway through the win over the Miami Dolphins. From there he seemed to make slow but steady progress until a disastrous outing against the Browns.

What they forget was how poorly he’d played up until that point. Perhaps that was a product of limited preparation on a short week. Regardless, he was tentative and timid the next week against the Bengals, leading to Devlin Hodges promotion to the starting role.

Devlin Hodges and Duckmania enjoyed quite a ride, engineering a comeback against the Bengals, followed by wins against the Browns and Cardinals. Steelers coaches took the training wheels off a bit against the Bills in the following week, and Devlin Hodges feel off the bike.

A week later a poor performance against the Jets led to Rudolph’s return, only to see Mason Rudolph injured. The Steelers also have former first round pick Paxton Lynch on their roster plus J.T. Barrett.

The moment the Steelers traded for Minkah Fitzpatrick the organization went “All In” on Roethlisberger’s recovery. The move cost them their first round pick. And it isn’t too much of a stretch to say that Minkah Fitzpatrick’s presence bumped Pittsburgh’s win total by two or perhaps three games. Moreover, the Steelers restructures of Ben Roethlisberger basically tie the two together for two more years.

It is certainly possible, but his play in 2019 created as many questions as it answered. Delvin Hodges earned folk-hero status and did some nice things, but he has a weak arm and has only shown an ability to execute a very limited play selection.

Lynch clearly has some talent and didn’t get much of a chance in Denver, but banking on his long-term future is foolish. Put that altogether, and in the abstract the Steelers 2020 draft need at quarterback really should be considered as High-Moderate.

But let’s repeat it, again: The Steelers are all in on Roethlisberger’s recovery. And there’s probably a better chance of finding coronavirus vaccine before the Steelers make their first pick in the 2020 NFL Draft than there is of a legitimate franchise quarterback actually falling to pick 49.

The Steelers will not and should not draft a quarterback in 2020.