Safety, as the name implies, is a critical position in football. Unlike other positions, it is almost impossible to mask sub-standard safety play with scheming and/or double teaming.

Some of those investments have borne fruit, others have rotten on the vine. During 2019 the Steelers had some stellar play at safety for the first time since Troy Polamalu retired. But that doesn’t mean they’re “safe” at safety and we’ll soon see why. 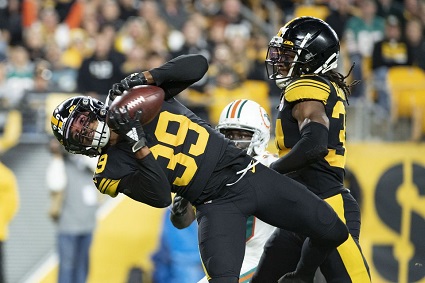 There’s one thing that the Steelers starting safeties Terrell Edmunds and Minkah Fitzpatrick share – no one predicted their arrival in Pittsburgh. The Steelers drafted Terrell Edumnds with their first round pick in the 2018 NFL Draft, shocking observers everywhere.

That was nothing compared to the shock that came 18 months later when they traded their first round picks to the Miami Dolphins for Minkah Fitzpatrick. The Steelers don’t trade first round picks. They just don’t. The last time they did it was in the mid 60’s when most people heard the word “Beatles” they still probably thought of insects.

While the Steelers defense isn’t as complex as it was under Dick LeBeau, it is certainly not easy for a young player to come in and play so consistently.

However, if Edmunds has quantity on his resume, quality is an open question. It is far too early to label him a bust. And Edmunds clearly has the athleticism needed to excel at the position. But he hasn’t shown the type of playmaking the Steelers need at strong safety either.

As Tony Defeo argued so correctly, Minkah Fitzpatrick did nothing less than save the Steelers 2019 season. Minkah had 5 interceptions, 2 fumble recoveries and two touchdowns in just 14 games. Moreover, Minkah makes the rest of the secondary better.

Fitzpatrick forces opposing quarterbacks to account for him on every play, and that extra millisecond of delay helps Joe Haden and Steven Nelson be better cornerbacks, and gives T.J. Watt and Bud Dupree just a little more time to get to the quarterback. The results speak for themselves.

Unfortunately, for the Steelers they’re depth at safety is perilously thin. Their number one backup, Jordan Dangerfield, neither got a restricted free agent tender nor did he get interest from opposing teams. Marcus Allen failed to make the initial 53 man roster, only landing their when AAF re-tread Kameron Kelly was waived due to off the field issues.

Marcus Allen might offer legitimate “upside” and Jordan Dangerfield might get by in a pinch, but you wouldn’t want either man to be starting for an extended period.

The Steelers find themselves in a similar situation at safety as they do at other positions on the depth chart. They’ve got two established starters.

Terrell Edmunds still has a long way to go to justifying the faith that Mike Tomlin and Kevin Colbert showed in him when the made him a first round pick. But there’s no realistic scenario that would see the Steelers entering this year’s draft looking to find Edmunds’ replacement.

But the Steelers depth chart is screaming to be addressed in the draft. Maybe Jordan Dangerfield or Marcus Allen can play at a Will Allen level of pressed into duty.

But nothing either man has indicates they can be counted on to do that.

There have also been whispers about either Cam Sutton and/or Justin Layne shifting to safety on a part or even full-time basis. And while that might work, it would compromise cornerback depth….

So the Steelers needs at safety going into the 2020 NFL Draft must be considered as Moderate-High.