I was 12 years old. It was late-summer, and the Pirates were playing the Braves down in Atlanta. At one point during the game, a third baseman (I don’t remember which team he played for) dove into the stands or the dugout to catch a foul ball. After he did so successfully, a Pirates television announcer (it had to a be Pirates guy, since we were too poor to have anything but over-the-air TV during that time) joked, “I’m not sure if he got both feet in bounds during that catch.”

When he said that, I got this warm and fuzzy feeling in the pit of my stomach. Why? I knew that football was right around the corner. I knew training camp would soon be starting up. After that, it was the preseason (believe it or not, back in those days, a preseason game was darn-near as special to me as a regular season game), and then, it would be Week 1 of the 1984 regular season.

I had already been a huge Steelers and NFL fan for a few years by that point, but I’ll never forget the warm and fuzzy feeling that just the thought of the upcoming football season gave me in that moment. 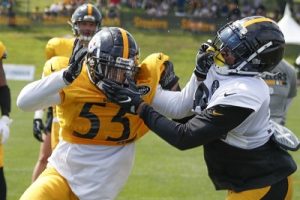 Just about every summer since then, I’ve had a brief moment where the thought of the impending football campaign has given me a feeling of joy.

Dorin Dickerson, a former Pitt and NFL tight end who grew up in Pittsburgh and is now a radio host on 93.7 The Fan, recently talked about a similar feeling he experiences even to this day, many years after his playing career.

He talked about how he starts to feel a little anxious and gets a bit of an adrenaline rush every summer when college and NFL training camps start back up. He mentioned freshly cut grass and how that made him “smell” high school football.

I got that part of it, at least–the smell of football in the air. Save for a brief stint playing midget football as a 12-year old, I never competed in the sport at a high level. But I always understand that time of year when you can just smell football in the air.

This is how much I love the sport.

Yes, I love baseball a ton and acknowledge that there is something very special about the early days of every MLB season — I get together with family right before the start of each season to watch a classic baseball movie (there’s nothing like a baseball movie) — but those football goosebumps, they’re real to me, damn it.

That feeling I described earlier–the warm and fuzzy one–has come in many forms every summer since that moment back in 1984. Whether it’s the smell of grass in the air, like Dorin Dickerson described, walking past a high school football field in mid-July or even the feel of a cool breeze while walking outside on a late-August evening.

And that’s why I’m growing more and more concerned that it won’t be there for me this summer. It won’t be there for any of the fans, thanks to the Coronavirus pandemic that has the world trembling in its cleats–kind of like a running back used to when he saw Jack Lambert and his toothless scowl staring back at him from across the line of scrimmage.

With every professional, collegiate and high school sport currently shutdown because of COVID-19, it seems like only a matter of time before football follows suit. 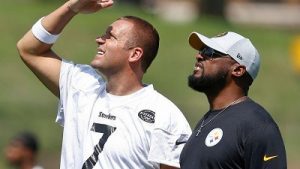 Obviously, you move on with your life. You cope. You gain perspective and realize that there are more important things than who will make the Steelers 53-man roster. There are more pressing matters than Ben Roethlisberger’s surgically repaired elbow or whether or not head coach Mike Tomlin can finally lead his team to a seventh Super Bowl victory.

There are more important things than Pittsburgh’s chances of winning the AFC North. The Steelers conversion percentage on third downs? That pales in comparison to the percentage of people that have succumb to the virus.

The Steelers AFC North record in 2020 will mean very little if we have record-highs in unemployment due to so many businesses shutting down over the pandemic.

But life has a habit of tackling us in the backfield on a fairly regular basis, even when there isn’t a deadly virus spreading throughout the world, and it’s always nice to have a pastime, a diversion, something to look forward to.

In fact, someone once said that the key to happiness is always having something to look forward to.

Obviously, football isn’t the only thing that brings me joy, that gives me something to look forward to. But football has always been such a huge part of my life and is without a doubt the MAIN thing I’ve always looked forward to.

I don’t know what’s going to happen in the world between now and when football is scheduled to start later this year, but I hope the late-summer includes a brief moment where I feel those warm and fuzzies in the pit of my stomach.

That could only mean one thing.