It wasn’t long ago that the Steelers appeared to be severely lacking at the tight end position. That seemed to change with the free agent acquisition of Eric Ebron in March. But was Eric Ebron enough of an addition to make tight end less of a priority for the 2020 NFL Draft? We’re about to answer that question. 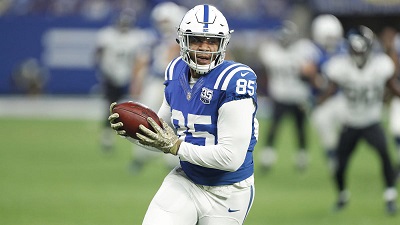 It’s fairly accurate to make the word starters plural when discussing the tight end position in the Steelers offense. Unfortunately for Pittsburgh, it was mostly a singular term in 2019–and that may have even been a stretch.

After coming off an exceptional and breakout season in 2018, veteran Vance McDonald seemed to disappear a year ago, catching just 38 passes for 273 yards and three scores. In fairness to McDonald, however, he, like every other receiving target, may have been severely limited due to the mostly season-long absence of quarterback Ben Roethlisberger.

As for others stepping up to fill the void left by Jesse James, who inked a free agent deal with the Lions? Xavier Grimble, a veteran who was looking to move up the depth chart following James’ departure, was injured and then waived. Nick Vannett, a four-year veteran Pittsburgh acquired in a trade with the Seahawks early in the year, contributed just 13 receptions for 166 yards in the number two role.

And viable, Ebron is. Yes, like McDonald, Ebron, who made the Pro Bowl in 2018, fell off a season ago, catching just 31 passes for 375 yards and three touchdowns. But just like McDonald, Ebron was hit with the sudden loss of his franchise quarterback, thanks to the surprising retirement of Andrew Luck right before the start of the regular season. And while it is true that Jacoby Brissett, the young Colts quarterback who stepped in to take Luck’s place, was much further along in experience and development than both Mason Rudolph and Devlin Hodges a season ago, his performance wasn’t quite on the level of Luck’s.

And we would be remiss without mentioning Ebron’s ankle injury that forced Indianapolis to place him on Injured Reserve late in the 2019 season.

Coming into his rookie season as a fifth-round pick out of Michigan, Zach Gentry, a converted quarterback who caught 49 passes in his college career, was expected to be a bit of a developmental project at the tight end spot. Gentry didn’t disappoint in that regard, as he appeared in just four games and caught one pass.

Again, what looked like a position of great need heading into free agency now seems to be one of strength, thanks to the addition of Ebron. If he can return to his Pro Bowl form under Ben Roethlisberger, he could be a dangerous weapon in Pittsburgh’s offense.

Ebron has a history of decent production playing with high-caliber quarterbacks — his first quarterback was Matthew Stafford after the Lions picked him in the first round of the 2014 NFL Draft— and he has 283 receptions for just under 3200 yards in his six-year career.

Vance McDonald and Eric Ebron should complement each other quite nicely moving forward.

As for adding depth behind the top two tight ends? It should be a priority, but only a Moderate-Low one.