Just 3 years ago the rest of the NFL was in envy of the Steelers wide receiver depth chart. They had a future Hall of Famer, a budding rookie 2nd round draft pick, and a physical phenomenon coming off of suspension.

By the middle of 2019 the Steelers were signing guys off of practice squads and playing them later that week. Injuries played a part in making that happen, but how much of it was tied to talent? The answer to that question will tell us a lot about how important wide receiver will be for the Steelers in the 2020 NFL Draft. 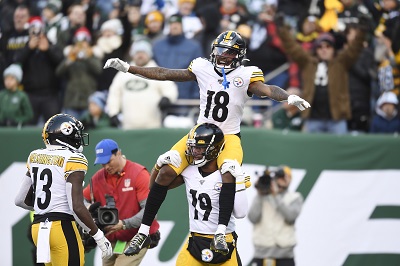 But how would JuJu Smith-Schuster fair now that NFL defenses didn’t need to build their pass defense around shutting down Antonio Brown. No one knew, and a year later we still don’t know. Ben Roethlisberger’s season lasted 6 quarters, and Mason Rudolph didn’t exactly have enough time to find his rhythm before he got knocked out with a concussion.

Fortuantely for the Steelers and JuJu, there’s evidence that the other two starting wide outs, James Washington and Diontae Johnson and offer enough splash play potential to take some heat off of Smith-Schuster.

James Washington dazzled during the 2018 and 2019 preseasons and, if reports are correct, his play during practice was just as dazzling. Yet Washington struggled to translate that on to the field during 2018 and the first half of 2019.

While he needs to sustain that, the arrow is pointing up on James Washington as it is on Diontae Johnson. Diontae Johnson flashed big play potential early in the 2019 season, with impressive touchdowns against San Francisco and Miami. But consistency was an issue. Still, he improved from a disastrous performance against the Browns at home, for big games on the road against the Cardinals and Jets.

If the Steelers have, at a minimum, three starter-capable wide receivers, their depth leaves a much to be desired. The next most targeted wide receiver in 2019 was Johnny Holton, followed by Donte Moncrief, then Ryan Switzer and then by Tevin Jones.

And Ryan Switzer was only targeted once after week 2, and missed the last 7 games of the season. Deon Cain offers legitimate potential and looked good while he was on the field, but his NFL resume consists of 6 targets.

While JuJu Smith-Schuster clearly is a step down from Antonio Brown as a number 1 wide receiver, the same can be said for 97.5% of other NFL wide outs. James Washington and Diontae Johnson also have a lot to prove, but it says here they will prove it.

Moreover, Ryan Switzer, when healthy, is not a bad number 4 wide receiver, particularly if a tight end such as Vance McDonald or Eric Ebron is drawing attention from linebackers and safeties.