The Steelers drafted Anthony McFarland Jr. in the 4th round of the 2020 NFL Draft, using their first of two 4th round selections to add the running back from Maryland to their backfield.

Anthony McFarland brings just two years of NCAA experience to Pittsburgh. In two seasons with the Terrapins, McFarland rushed for over 1,600 yards, although his production dropped between his freshman and sophomore year due to injuries. With that said, McFarland did break the University of Maryland’s freshman rushing record.

Steelers running backs coach Eddie Faulkner described McFarland as “He’s really explosive.” Faulkner continued, “He sees the crease, and it’s his ability to hit the crease — he gets from 0 to 60 quick.”

What the video won’t show is some of the red or at least yellow injury flags that accompany McFarland’s arrival in Pittsburgh. The Maryland native and DeMatha Catholic graduate missed his senior year of high school with a broken leg, took a red shirt freshman year at Maryland, and then saw a high ankle sprain ruin his second year at Maryland.

Regardless, Anthony McFarland can look forward to seeing familiar faces in Pittsburgh. New Steelers quarterbacks coach Matt Canada was his coach at Maryland in 2018, Derwin Gray blocked for McFarland in 2018, and Mike Tomlin’s son Dino played with McFarland at Maryland, although according to Joe Rutter of the Pittsburgh Tribune Review, McFarland admits he never had contact with Tomlin. 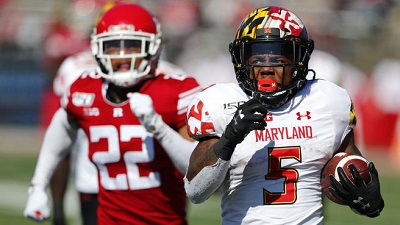 While he’s leaving College Park after just two seasons, Anthony McFarland Jr. put plenty on tape to establish his pedigree. Here is a look at his highlight reel:

So Anthony McFarland’s 40 puts him in good company, adds speed to the backfield and threatens Kerrith Whyte whose 4.36 40 speed is what made him so enticing to the Steelers last fall when Kevin Colbert did a rare bit of practice squad poaching.

Competition brings out the best and the Steelers backfield certainly must improve on its 2019 performance. Welcome to Steelers Nation Anthony McFarland.