The Steelers drafted Kevin Dotson in the 4th round of the 2020 NFL Draft, using their second pick in that round to bolster their offensive line with the guard from Louisiana. Pittsburgh’s offensive line is still fairly strong and the Steelers 2020 Draft Needs Matrix rates offensive line in the middle of the pack, but the team does need to build depth for the future.

Standing at 6’4” and weighing in at 320 pounds, Dotson has all of the measurables. Better yet, as Chris Adamski of the Pittsburgh Tribune-Review reports, he also brings a little bit of “nasty” to his game, which is necessary on offensive line.

As Dotson explained his psychological warfare tactics to the Pittsburgh media:

It was more of a intimidation-type thing. I feel like I can win any play that I do. So, I’ll tell them the play. If I tell you the play and you still can’t stop it — it hurts your morale way more.

Wow. That attitude harks back to the heyday of Chuck Noll who preached that if you out executed your opponent, it didn’t matter if you play calling was predictable. Despite the confrontational attitude, Dotson is well liked by those around them as Steelers offensive line coach Shaun Sarrett confessed, “I kept trying to find someone to say something negative about the kid — and I couldn’t find it.” 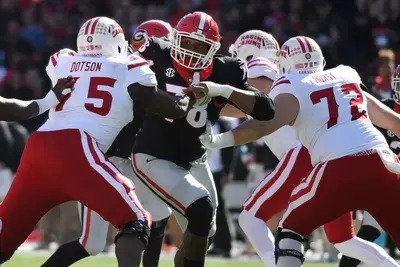 The quantity of Kevin Dotson YouTube highlight clips is surprisingly spare. Fear not, there is one good one:

Shaun Sarrett described him as a “People mover” and added, “He is the type of guy when you look at that old-school run game stuff like back in the day when you run through guys, this really flashes on his tape.” Fair enough. This tape doesn’t scream “He’s the next Alan Faneca” but not a bad reel from a 4th round pick.