First, wherever you’re reading this, it is our sincere wish that you and your family are both healthy and safe. That is far more important than anything and everything else that appears on this blog.

Clearly, the inability to make timely updates to a Steelers blog ranks pretty low when it comes to the disruptions caused by the Coronavirus. Which brings us to Chris Wormley’s addition to the Steelers defensive line. 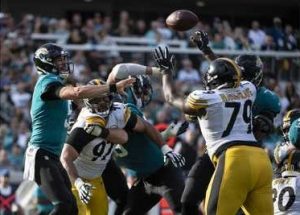 To no one’s surprise, the Steelers lost Javon Hargrave in free agency. Hargrave will move to the other side of the state after having signed a $39 million contract with the Philadelphia Eagles that includes $26 million of fully guaranteed money.

The Steelers could have put together a competitive deal along those lines, but only at the expense of losing Bud Dupree.

Since Bud Dupree is on the field for 90% of the Steelers snaps and Javon Hargrave is on for only 63%, you can see why Kevin Colbert and Mike Tomlin chose Dupree over Hargrave.

Nonetheless, the move left a rather important hole in the middle of the Steelers defensive line. Hargrave had made 52 starts, recorded 10 sacks over the last two years and was clearly a peer alongside Cam Heyward and Stephon Tuitt.

The Steelers declined to stand pat with Tyson Alualu and Isaiah Buggs and traded their 5th round pick in the 2020 NFL Draft to the Baltimore Ravens for Chris Wormley.

In 3 years with the NFL, Chris Wormely has made just 15 starts and recorded just 2.5 sacks. He’s also made 9 QB hits, or one more than Javon Hargrave made in his 3rd year in the NFL.

And if the only movie we were watching here was Trading Places, there’s no question the Steelers would come out on the short end of the stick. But Kevin Colbert is also streaming MoneyBall in tandem, and that pulls two other numbers into this equation: $3,450,000 and $2,133,000.

And this of course ignores the fact that the Eagles have already cut Hargrave a check for 11 million and change. Clearly, Javon Hargrave is a better defensive lineman than Chris Wormley.

Colbert makes these gambles every spring. One of the best examples came in the spring of 2013 when Colbert reasoned that dollar-for-play, he could get more out of William Gay than Keenan Lewis. (He was also expecting big things from Cortez Allen, but that’s another story.)

Lewis had budded into a pass-defending machine in his 4th year in Pittsburgh, and seemed to offer an oasis for a team starved for quality cornerback play. William Gay had gone to Arizona and, like Bryant McFadden before him, was back in Pittsburgh a year later.

Yet, William Gay’s return to Pittsburgh heralded the days of Big Play Willie Gay, where he notched 8 interceptions and 5 pick sixes in 5 seasons. Keenan Allen got paid a lot more money in New Orleans, but only had 1 strong season before injuries derailed his career.

Of course, these MoneyBall gambles don’t always work. The Steelers essentially swapped Al Woods for Cam Thomas in 2013 and their defensive line suffered because of it.

However, if Craig Wolfley assessment of Chris Wormley is on the mark, expect Kevin Colbert to win this bet.