Of the many reasons people on the national and local level have always had a problem with Steelers quarterback Ben Roethlisberger, perhaps his fitness regimen (or lack thereof) ranks near the top of the list.

Maybe the part about not being a physical fitness freak and still having the career that he has is what’s always rankled the feathers of his detractors the most. After all, if a great natural athlete like Roethlisberger would have just committed himself to working out as hard as Tom Brady has throughout his storied career, gosh golly, the Steelers may have won even more Super Bowls than the two they’ve claimed since selecting No. 7 11th overall in the 2004 NFL Draft. 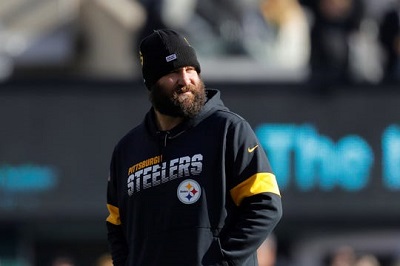 Roethlisberger’s dedication to fitness took another hit last week after national sports personality and NFL insider, Jay Glazer took a bit of a shot at him in a recent column published in The Athletic:

First of all, let’s not put the words fitness and Ben Roethlisberger together, they are allergic to each other. There is no fitness in Ben Roethlisberger. His idea of a great offseason workout program is doing one yoga session, playing some golf and drinking some beer.

Glazer later went on Fox Sports Radio with Jason Smith and Mike Harmon and clarified his remarks by saying that, not only was he joking, but that these are things that Roethlisberger has told him in the past in reference to his offseason conditioning program.

I can see Roethlisberger saying such things, “Oh yeah, I just did some yoga and drank some beer–it was an even better offseason workout program than usual.” But do you think Roethlisberger would be genuine when interacting with someone like Glazer, a Fox insider who is extremely tight with Steelers head coach Mike Tomlin?

If you’ve been following the career of Roethlisberger as closely as most Steelers fans, you know he has a bit of a rebellious streak. He’s also really passive-aggressive in how he deals with the media. Take a few years ago and his “Maybe I don’t have anymore” comments following a five-interception performance in a 30-9 Week 5 loss to the Jaguars at Heinz Field in 2017.

The media took that quote and ran with it. Some –– including Bleacher Report’s Brad Gagnon, who cited the quote in an article from February in-which he suggested the Steelers should cut ties with their veteran quarterback — still bring it up today. However, I dare you to go back and listen to the soundbite of that quote, which was a response to a reporter’s question about his horrible performance against Jacksonville. Roethlisberger is clearly being defensive and he’s clearly being snarky in his response.

During his radio appearance, Glazer also stated that Roethlisberger, who is trying to come back from major elbow surgery that caused him to miss all but six quarters of the 2019 season, is rehabbing as hard as ever this offseason. Roethlisberger has also gone on record about his rigorous rehab program in preparation for a bounce-back 2020 campaign.

But do you really think Ben Roethlisberger spends most offseasons drinking beer and golfing? Maybe he enjoys such activities, but if you truly believe he can spend an offseason that way and still play an elite brand of NFL quarterback–especially in his mid-to-late-’30s–I have oceanfront property in Pittsburgh I’d like to sell you.

In fact, you can find recent evidence of Roethlisberger’s dedication. Back during the 2016 offseason, following a 2015 campaign in which he missed several games due to an MCL sprain and foot injury, Roethlisberger participated in a rigorous cardio program and dropped 15 pounds.

The list is extremely short when it comes to those who have played the quarterback position at Roethlisberger’s level throughout NFL history. You don’t last as long as he has, and he don’t accomplish the things he has, unless your dedication goes above and beyond the weekend warriors of the world.

If Ben Roethlisberger wasn’t always highly dedicated to his craft throughout his 17-year NFL career, I doubt he’d still be around at the ripe old age of 38 to have people question his fitness level.