Memorial Day’s passing brings us closer to the NFL season’s start. But in this COVID-19 context, there are more questions than there are answers about the coming NFL year. Unlike the NBA, NHL and MLB, the NFL is fortunate in that it has had time to prepare a Coronavirus virus contingency plan.

The prospect of staging major league games in empty stadiums is eerie. Pittsburgh Tribune-Review columnist John Steigerwald has gone as far as to argue that if fans can’t attend games “…the NFL should forget it. Write off the 2020 season.”

“Big games need big crowds,” Steigerwald insists, hypothetically wondering what it would have been like for Bill Mazeroski to round the bases at Forbes Field with no fans in the stands.

At BTSC, Tony Defeo suggests that if the WWE can host matches without fans, then the NFL can play games in empty stadiums. As Defeo deftly points out, “Unlike Razor Ramon, T.J. Watt doesn’t need to draw the ire of the fans in attendance in order to be the bad guy—he just has to sack the quarterback.”

But imagine the Steelers are mounting a comeback in their Thanksgiving game against the Ravens. Would a T.J. Watt or Bud Dupree strip sack of Lamarr Jackson have the same game-changing impact absent the roar of the fans?

Imagine in the same game, James Washington sets up a Ben Roethlisberger to JuJu Smith-Schuster go ahead touchdown pass with a devastating block followed by an end zone Terrible Towel Twirl al la Yancey Thigpen vs. the Browns in the ’94 playoffs would bring Heinz Field to a fever pitch.

Defeo and Steigerwald advance completely opposite arguments, yet both men are on to something. Fortunately there’s a way to reconcile both of their points.

Although it was filmed long before the word “COVID-19” entered our vocabulary, fictional coach Eric Taylor provided the antidote to playing games in front of empty stadiums during Season 4 of Friday Night Lights.

Late in the season, rich kids from the rival Dillon Panthers use their 4x4s on to destroy the field of the less-well-to-do rival East Dillon Lions just before their season-ending matchup. The Dillon Panthers need this win to reach the playoffs, and their plan is to force the game on to their home truf.

If by September it is unsafe to play games in front of full stadiums, the NFL should follow coach Taylor’s example and stage games at local high schools. Seriously. 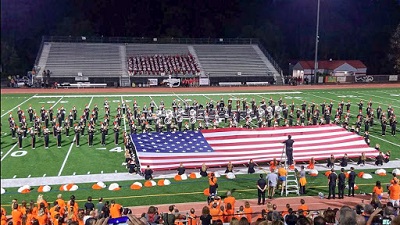 Moving games from pro stadiums to local high school fields would solve a lot of problems. Instead of reinforcing sense of isolation that COVID-19 has wrought, it would bring games back to their roots. If the NFL shifted to smaller venues, the focus would remain on the players and the action itself. Empty seats would fade out of view.

Doing so could also serve to re-connect teams to their communities. General-admission tickets could sell for $25 a head. Local health officials could use the Abbott Labs and/or Bosch machines to test fans before the games, ensuring everyone’s safety. Doctors, nurses, orderlies, grocery store workers and other “first responders” could be given free tickets.

The Steelers could play one week at Central Catholic, another at Baldwin High, another at Bethel Park, and yet another at Upper St. Clair. I grew up in the DC suburbs rooting against the home team, but to be honest, the idea of the Washington Redskins playing under the lights at Wheaton High School is pretty cool.

There is simply too much money be lost. Forbes estimates that the Steelers would lose a minimum of $156 million if they have to play in front of an empty Heinz Field. The Dallas Cowboys could lose up to four times that amount. Knowing that, the NFL will do whatever it can to get fans into the stadiums.

But if that proves to be impossible, then Roger Goodell would do well to take a page for Eric Taylor’s book.