Of all the news to come out of the recent virtual NFL owners’ meetings, the least surprising was the use of the replay challenge system for plays involving possible pass interference — or a lack thereof — going away without much of a fight. 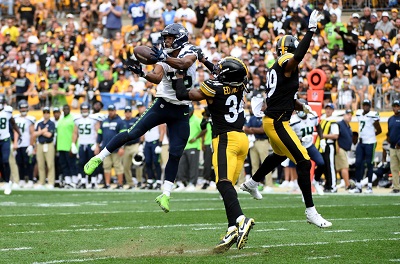 No fight, really, and isn’t that sort of fitting? Much like March, this rule roared into existence last spring on the heels of a very controversial non-call on a pass-play near the end of the NFC Championship Game between the Saints and Rams.

Sean Payton, the head coach of the Saints, the screwees in the title game, was adamant that something had to be done so as to prevent the screwers, the officials in the NFC title match-up, from ever again so directly determining who could and could not go on to become Super Bowl champions.

Perhaps the NFL acted a bit too hasty–although, it may have been hard to blame league officials for that. After all, the Saints were the second high-profile team in as many seasons to be prevented from possible championship success due to the incompetence of game-day officials in a very high-profile match-up.

Just one year earlier, in the waning moments of a very important game late in the 2017 regular season, Steelers tight end Jesse James was screwed out of a touchdown that likely would have given Pittsburgh a pivotal victory over the Patriots at Heinz Field.

Instead, New England won, the Steelers had to settle for the number two seed in the AFC, and they ultimately lost in the divisional round to a Jaguars team that had run all over them at Heinz Field during the regular season.

Why do I say James was screwed out of a touchdown? Because the very thing that prevented him from being awarded one — the convoluted Catch Rule — was augmented the following year to allow the officials to use their best judgment when determining what an actual catch was.

So with the controversy surrounding the Catch Rule acting as a backdrop, perhaps the officials thought they had to do something about pass interference.

They did. On paper, it kind of made sense. I’m not going to lie, as a fan, one who witnessed cornerback Joe Haden get a raw deal on two defensive pass interference penalties in a critical 2018 Week 16 loss to the Saints, ironically enough — a game that prevented the Steelers from reaching the postseason — you better believe I wanted a pound of a flesh.

It seemed so simple; all the league did was add pass interference to its existing replay review system: NFL coaches could throw a challenge flag to review a play in-which pass interference was or was not called. And inside of two minutes of the half or game, such plays were subject to automatic reviews.

Why? I guess, at the end of the day, it was a little hard to reverse calls involving pass interference than it was to determine what a catch looked like.

The Steelers didn’t get away unscathed, sadly. Midway through the fourth quarter of a Week 2 game vs. the Seahawks at Heinz Field, Seattle head coach Pete Carroll challenged a non-call on safety Terrell Edmunds on a second and 20 play. After further review, it was determined that Edmunds had, indeed, interfered on the play.

In real time, the play didn’t look like much. On review, I guess you could have made a case for interference. But the caveat the NFL initially threw in when creating the rule was that there had to be “clear and obvious” evidence to overturn a play involving pass interference.

As you know, the Seahawks game was the one in-which quarterback Ben Roethlisberger went down with a season-ending elbow injury. Despite that, however, Pittsburgh managed to hang in the playoff race until the very end, missing out by a mere game.

Therefore, a rule that may have helped the Steelers make the playoffs had it existed in 2018 helped in preventing them from making the postseason in 2019.

Too bad the new rule was still roaring quite loudly in Week 2. Had it gone sheepishly into the night a bit sooner, Pittsburgh may have made the playoffs in 2019.

The NFL, its players and its fans are all much better off.