The Steelers are set to report to training camp this week.

It will be a training camp like no other. That’s right, thanks to the ongoing COVID-19 pandemic, NFL players will have a ramp-up period to get acclimated to this new reality. This ramp-up period will include testing and weight and cardio conditioning. 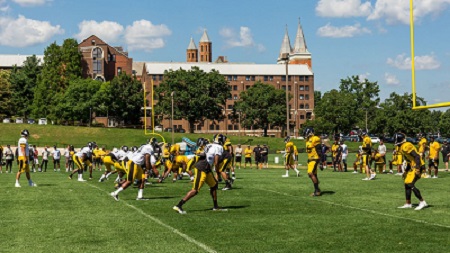 After that, it’s actual padded practices starting around mid-August or so. Oh, and did I mention training camp will be conducted at Heinz Field instead of St. Vincents this year? Also, there will be no preseason games. That’s right, due to the players’ concerns over traveling and putting themselves at risk, the NFLPA and NFL owners agreed to do away with exhibition football as a means to avoid unnecessary exposure and travel.

That’s a lot to digest. That’s a lot to take in during this “new normal” that will include a regular season with few or zero fans in attendance at stadiums all across the NFL.

Actually, the Steelers are a bit of an anomaly. Even though they haven’t made the playoffs since the 2017 season, they enter 2020 with few starting jobs up for grabs.

Actually, other than the battle between Zach Banner and Chukwuma Okorafor for the vacant starting right tackle spot, I can’t think of any other starting jobs that are truly up for grabs. And when it comes to that vacant right tackle spot, it’s kind of manufactured. In other words, head coach Mike Tomlin announced weeks ago that the team would begin training camp with Matt Feiler, the starting right tackle the past two seasons, as the starter at left guard in place of the recently-retired Ramon Foster.

That was a slightly surprising revelation by Tomlin, especially considering the free agent acquisition of Stefen Wisniewski, a 10-year veteran who could easily slide into the left guard spot for at least the 2020 season. Meanwhile, rookie Kevin Dotson, who Pittsburgh selected in the fourth round of the 2020 NFL Draft, could hone his craft and prepare for life as the starting left guard hopefully by 2021.

But even if things don’t work out, and neither Banner or Okorafor jump up to seize the opportunity at right tackle, Feiler could easily move back to that spot, while Wisniewski assumes the role as starting left guard.

Again, other than the questions along the offensive line, what other starting jobs are open? I suppose the Steelers have to find their next starting nose tackle following the free agent departure of Javon Hargrave.

But do they really? After all, it’s no secret that Pittsburgh’s defense spends very little time in its 3-4 base formation–like 33 percent. Is finding a new starter really all that critical? Veteran Tyson Alualu seems poised to absorb the starter snaps at nose tackle, anyway, so that might be your answer.

What else is there? We know JuJu Smith-Schuster is going to be the number one receiver. After him, James Washington and Diontae Johnson appear to be interchangeable. True, based on his rookie performance, Johnson probably has the inside track on the number two receiver position, but with the Steelers employing so many three and four-receiver sets, does it really matter who your number two receiver is?

We also know the defense, one of the more elite units in the NFL, has no question marks at the top of the depth chart other than at nose tackle, which, again, doesn’t seem that critical of an issue.

So there you go. The 2020 Pittsburgh Steelers are about to embark on the most unusual training camp in the history of the NFL, followed by a regular season that figures to be quite surreal.

They’re coming off back-to-back playoff-less seasons, and, rather surprisingly, they don’t have many questions at the top of the depth chart.

Not a bad place to be in this new and surreal NFL reality.