I don’t know when everything became a huge deal with fans of the Steelers or any professional football team.

But no matter what you attribute it to, there’s no doubt everything, all the darn time, is a big deal to fans.

The latest thing that has become a big thing to fans–at least Steelers fans–was the announcement on Friday that Steelers outside linebacker Bud Dupree, who signed his $15.8 million franchise tag back in the spring, has filed a grievance for the purposes of being re-designated as a defensive end. 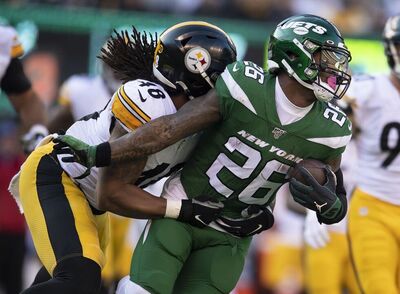 Why would Dupree do such a thing? To make an extra $2 million in 2020, that’s why. You see, under the rules of the NFL’s franchise tag, certain positions are considered more valuable than others and worth more under the tag. In relation to outside linebacker, defensive end is certainly that. If Dupree wins his grievance and is designated a defensive end, his 2020 salary will go from $15.828 million to $17.788 million.

It doesn’t seem like a ton of money, but apparently it’s enough to ruffle the feathers of so many Steelers fans who, let’s be honest, never liked Dupree, the Steelers first-round pick in the 2015 NFL Draft, in the first place.

My question–my very rhetorical question–is so what? Why worry about Dupree’s grievance if you’re a Steelers fan? Why get hot and bothered by it? (Speaking of which, our site editor has a very good article expressing his thoughts on the subject.) Why go online and express your desire to see Dupree gone, if not this year, then certainly next, when he will presumably be free to shop his services elsewhere, provided Pittsburgh doesn’t franchise tag him for a second straight spring?

I guess those are a lot of questions, but they all have to do with the same thing: It’s not your money. You’re not the one who is going to have to pay Bud Dupree the extra $2 million, provided he wins his grievance — an unlikely result if I were a betting man.

As for the money side of things? Dupree isn’t going to hold out in 2020, not after signing the franchise tag. If Dupree took the same route as Le’Veon Bell, the Steelers former All-Pro running back who didn’t sign his franchise tag until the start of the season in 2017 and not at all in 2018, I could see fans being concerned and/or angry.

But it would be the height of foolishness for Dupree to sign his tag and then hold out during training camp and/or the regular season. He’d be subjected to fines and, unless I’m mistaken, the Steelers would retain his rights in 2021.

If Dupree has that kind of season, he’ll probably be free to make as much money–including guaranteed money–as he wants in 2021. With the two sides reportedly far apart on a long-term contract, and with the deadline to reach a multi-year deal set to expire on July 15, it doesn’t look like Dupree will be donning the black and gold next year.

That’s really all you should concern yourself with. As for that extra $2 million the Steelers may have to pay Dupree? Let them worry about that.