As the Steelers unique Heinz Field training camp begins to ramp up this week, complete with padded practices, there aren’t many starting jobs up for grabs.

There’s the battle for the starting right tackle spot between Chukwuma Okorafor and Zach Banner, along with…….that’s really about it.

There is still intrigue–including the continued progress of quarterback Ben Roethlisberger following major elbow surgery that snuffed out his 2019 campaign; the development of second-year inside linebacker Devin Bush, a talent that could take an already explosive defense to a whole new level in 2020; the overall abilities of a rookie class that includes receiver Chase Claypool, outside linebacker Alex Highsmith, guard Kevin Dotson and running back Anthony McFarland; and, oh yes, the progress of third-year quarterback Mason Rudolph, just one season after he turned in mixed results–at best–while filling in for an injured Roethlisberger.

Not much news there, not unless you’re talking about the starting slot corner position that has been occupied the past three seasons by Mike Hilton, an undrafted free agent — a diamond in the rough, if you will — who Kevin Colbert plucked out of nowhere in 2017 (the Patriots practice squad, actually) to make the Steelers roster and fill the void at a position that had been seriously neglected for many years. 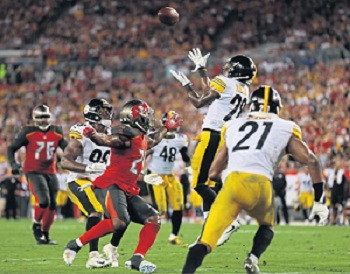 Not only did Hilton instantly fill a void, he became one of the better slot corners in the entire NFL, as the product from Ole Miss — or the same school that failed and oft-injured second-round pick (and believed to be slot-corner extraordinaire) Senquez Golson hailed from two years earlier–finished his rookie campaign with two interceptions, six passes-defensed and a whopping four sacks — including three in a blow-out victory over the Texans on Christmas Day.

So who is supposedly coming for his job? How about Cameron Sutton, a third-round pick out of Tennessee in the 2017 NFL Draft. That’s right, Sutton is believed to be a serious contender for the slot corner role, this summer.

And far be it for me to contradict “they” two summers in a row, but if you think about it, why would you take a player like Hilton, again, someone who is considered to be one of the better slot corners in the NFL, and bench him in his fourth season? That was a rhetorical question, because you wouldn’t.

And the Steelers won’t, either. This is just my theory (my conspiracy theory, if you will), but I think Pittsburgh is hoping Sutton makes the competition for the supposed open slot corner position close at training camp, but not close enough that he wins.

There’s already so much tape on Hilton that, even if he loses his starting job in 2020, interested teams will know enough about him to offer him a fat contract in 2021. As for Sutton, the only way he will truly be on anyone’s radar is if he starts in 2020–and excels.

If you’re the Steelers, why would you risk it? They already know what they have in Hilton. They thought enough of his abilities to tender him and pay him $3.2 million for the 2020 season. However, the whole tender thing won’t work for Hilton, next season. He’ll be able to shop his services to the highest bidder–and the highest bidder is likely to pay him much more money than the Steelers and their ongoing salary cap restrictions (restrictions that are about to get worse due to the revenue-shrinking pandemic)–would ever seriously consider.

With that in mind, you let Hilton start one more year at slot corner. In the meantime, you can keep Sutton in the same versatile role he’s been in since his rookie season.

Starting next season, the Steelers let Hilton walk and offer Sutton a team-friendly multi-year contract and hope that he settles for an annual salary on par with the $3.2 million Hilton is making in 2020.

Sound logical? I think so. The Steelers have a good thing going on defense, especially in a secondary that has seemingly found all the right parts after many years of struggle.

Let Hilton do his thing for one more season. After that, give the starting slot corner job to Sutton.