Pittsburgh Steelers 2020 “training camp” isn’t a week old yet, but two more players have been placed on the leagues COVID-19 reserve list – James Washington and Jaylen Samuels. The offensive duo joins cornerback Justin Layne, a third round pick from the 2019 NFL Draft. Aaron Springs, a fellow defensive back, was already on the list. 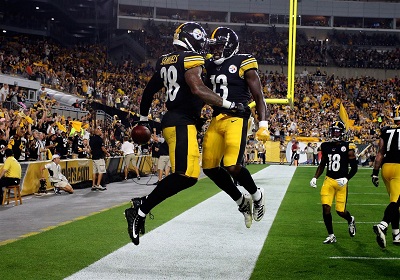 Symptomatic players must see 10 days pass after their first COVID-19 symptom and must have a full 72 hours pass since their last symptoms last occurred. Their return must be approved by their team’s doctor in concert with both the ICS and the NFL’s chief medical officer.

The health and safety of the players impacted must be of paramount concern, and it is Steel Curtain Rising’s sincere concern that James Washington and Jaylen Samules, (and Justin Layne and Aaron Springs for that matter) remain COVID free and return to the practice field in full health at Heinz Field.

Put in simple English, injuries are part of the game. In that light, James Washington’s absence shouldn’t impact the Steelers wide receiver corps much. JuJu Smith-Schuster remains the leader, with Diontae Johnson returning to build on his strong rookie year. Chase Claypool, the Steelers 2nd round pick in the 2020 NFL Draft will perhaps get a few more reps, but he was always going to make the team.

Potentially, Dion Cain could benefit (as could Ryan Switzer), but a best-case scenario would see James Washington returning to the Steelers roster before padded practices start on August 17th.

James Conners and Benny Snell Jr. are roster locks, and Anthony McFarland Jr.’s status as this year’s 4th round picks doesn’t give him a lock on a roster spot, but a slot is basically his to lose. The Steelers also like Kerrith Whyte.

Even prior to landing on the COVID-19 reserve list Jaylen Samuels was going to need to fight for a roster spot. Now that fight just got more difficult.

To meet the NFL’s 80 man roster limit the Steelers cut 8 players, including:

While it is no surprise, J.T. Barrett’s departure ends any speculation that he had a shot at competing with Paxton Lynch and Devlin Hodges for the third slot behind Mason Rudolph and Ben Roethlisberger.

Of the rest of the cuts Quadree Henderson is the most prominent. The Pitt graduate spent the summer of 2018 with the Steelers and turned in an strong preseason effort, but that wasn’t enough to land him a roster spot.

From there he spent time with the Giants, Jets, Jaguars and Panthers before returning to Pittsburgh last winter via the practice squad.