Steelers receiver James Washington appears to have all the tools necessary to become an elite receiver in the league, save for height.

But height has never kept a Steelers receiver from achieving greatness, as the likes of Lynn Swann, Louis Lipps and Antonio Brown all will attest.

Washington, a second-round pick out of Oklahoma State in the 2018 NFL Draft, is physical, he’s fast, he’s capable of making those tough combat catches, etc., etc. All of these attributes were on display during Washington’s sophomore season with the Steelers, when he led the team in receiving yards with 735. 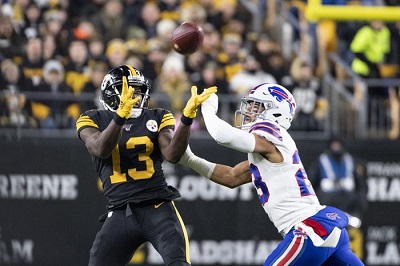 The fact that James Washington did this after a rather forgettable rookie season in-which he posted a miserable 217 receiving yards on an equally miserable 16 receptions was all the more remarkable considering he didn’t have quarterback Ben Roethlisberger for all but six quarters of the 2019 season.

That’s right, without Ben Roethlisberger, who suffered a major elbow injury that would require invasive surgery to repair, the Steelers quarterback play, well, it left a lot to be desired a season ago. Mason Rudolph had his moments, as did Devlin Hodges, but both also turned in moments that weren’t so great.

Maybe because the Steelers just keep drafting receivers with high picks. JuJu Smith-Schuster, a second-round selection out of USC in the 2017 NFL Draft, is now one of the stars of the team, a leader, someone Pittsburgh is counting on to rebound after a 2019 in which he struggled both in terms of production and with his health. Then there’s Diontae Johnson, a third-round pick out of Toledo in the 2019 NFL Draft, a player that came into the pros being compared to Antonio Brown, a comparison that seemed rather apt after a rookie campaign in which Johnson pulled in 59 receptions for 680 yards.

And let’s not forget about Chase Claypool, the Notre Dame receiver the Steelers just selected in the second round of the 2020 NFL Draft. Claypool is big, fast and strong–they haven’t dubbed the native Canadian “Mapletron” for nothing.

Why has James Washington gotten lost in the shuffle? Why aren’t bigger things expected of him. How come he’s not expected to make an even bigger leap in 2020 thanks to the return of Roethlisberger?

I wish I had the answer to these questions, but he has just as much of a chance to make an impact on the Steelers offense in 2020 as any other member of their receiving corps.

As the saying goes, I wouldn’t sleep on James Washington if I were you.