The Pittsburgh Steelers beat the New York Giants 26-16 to open their 2020 season in an empty MetLife Stadium.

The Steelers victory has been described as “workman like,” “not pretty” but nonetheless a new blueprint and a reminder that “its not 2019.” All accurate descriptions, but if you want to understand the victory, you need look no further than the sandwich cookie.

Stay with me on this and see why. 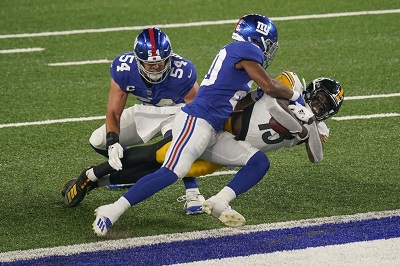 Last season was one Steelers fans prefer to forget, yet early in the Giants game, the 2020 Steelers teased a reprise of the worst of 2018 AND 2019.

True to 2019 form, the defense stepped up and forced the Giants to settle for 3 points even though the Steelers had gifted them the ball at the 3. Also following the 2019 template was T.J. Watt, whose heads up interception of Daniel Jones set up a 6 play drive that ended in a Ben Roethlisberger to JuJu Smith-Schuster touchdown.

Still, as the 2 minute warning loomed, the Steelers were down 10-9 and Dustin Colquitt had already punted 3 times. Which brings us to our sandwich cookie analogy.

Everyone knows that you really eat a sandwich cookie for the stuffing in the middle. When Oreo first launched “Double Stuf” my brother campaigned for my mom to get it at the grocery store. She refused, suggesting that we’d have better luck getting it on a visit to my grandmother’s house.

Conveniently, my grandmother lived in Baldwin, three doors from the Pittsburgh city line. I don’t know that we ever got “Double Stuf” Oreos there (we DID get plenty of other junk food), but the Steelers performance on both ends of half time was pure “Double Stuf.”

Complaints of Mike Tomlin’s clock mis-management issues have become so rote that no one ever bothers to question if they’re actually supported by events on the field. Mostly, they are not, and the end of the 1st half against the Giants offers another example.

The Steelers went to work at their own 22 yard line with 1:32 left to play. The next 69 seconds would see:

Thanks to these efforts the Steelers found themselves at New York’s 11 with 0:23 seconds and time outs left. That was nice, but what came next was truly sweet:

As Tony Defeo opined recently, James Washington doesn’t get a lot of love from Steelers Nation, but his effort to get the touchdown evoked visions of Barry Foster against Atlanta in ’93 or Mark Bruener against the Raiders in ’00.

Those memories may date me, but all three plays provide about as clear examples as you can find of a player willing himself into the end zone.

Red Zone Rising – Double Stuf to Start the 2nd Half Too

The New York Giants started their first possession at 12:07 from their own nine where Daniel Jones began to methodically pick apart the Steelers defense with an ease that hasn’t been seen in years. 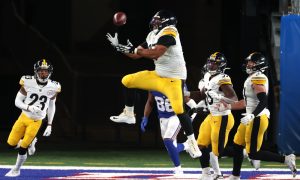 While you never want to see an opponent convert six 3rd and 4th downs in a single drive, Steelers coaches were rotating Ola Adeniyi and Alex Highsmith in for much of that 8 minute span which can only have helped New York.

Because when the Giants reached the Red Zone, Mike Tomlin and Keith Butler made sure that T.J. Watt and Bud Dupree were on the field, and it was Dupree who flushed Jones from the pocket and batted his arm as he threw a pop fly right into the arms of Cam Heyward, who intercepted the ball for a touchback.

The first 18 plays of that drive undoubtedly made Fantasy Football owners who started Daniel Jones very happy. But Heywards interception reinforced the fact that in Reality Football yardage between the 20’s means nothing when defense stonewalls you in the Red Zone.

It may not be the reason why you eat the sandwich cookie, but you can’t have a sandwich cookie without the hard cookies holding the stuffing in place.

Sure, the long touchdown that Steven Nelson allowed represented a low light, but it is hardly a reason to panic. Terrell Edmunds name was heard a little too often for his own good, but the fact that Ben Roethlisberger out rushed Saquon Barkley proves that his supporting cast is pretty good.

Tight ends Eric Ebron and Vance McDonald might not have made a lot of noise, but Eric Ebron’s lone catch converted a third down on the Steelers first touchdown drive. Certainly, the uneven offensive line play plus the injuries to Zach Banner and Stefen Wisniewski fuel cause for concern, but it is too early to panic.

But going into and coming out of half time, the Steelers fused determination with timely big plays and sandwiched those sweet spots on both ends with solid fundamental football.

That’s a smart way to start the season and also a recipe that can take the Pittsburgh Steelers far in 2020.