Taken from the grade book of a teacher who sees his class at 2-0 with room to grow, here is the Pittsburgh Steelers Report Card for the win over the Broncos. 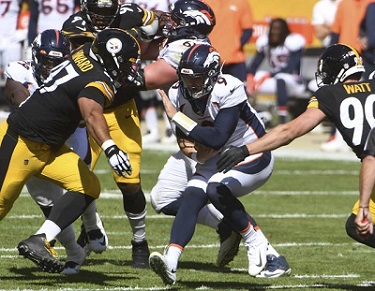 Quarterback
Ben Roethlisberger was harshly critical of himself after the game and it is true that his interception and the Steelers 2-12 3rd down conversion rating disappoint. But Roethlisberger was equally impressive on both of his touchdown strikes, neither of which were easy throws. And Ben continues to spread the ball around. Grade: B

Running Backs
James Conner ran strong, even if you take out his long run and by no means should that final run be discounted. Conner also caught two passes out of the backfield. Benny Snell had a bad day. He caught one pass for a loss and had 3 carries for 5 yards and a fumble which put Denver back in the game. Jaylen Samuels had 1 catch for 4 yards. In the end, Conner’s long run helps compensate for Snell’s fumble. Grade: B-

Tight Ends
Eric Ebron had 3 catches for 43 yards and is quickly working himself into offensive weapon. Vance McDonald had one catch for 3 yards. Grade: B

Wide Receivers
Diontae Johnson had 8 catches for 92 yards including two key receptions which he had to adjust to make. JuJu Smith-Schuster wasn’t far behind with 7 catches of his own. The cumulative total of two of Chase Claypool’s 3 catches amounts to 4 yards, the other one went for 84 and a touchdown. Another weapon is emerging on the Steelers offense. James Washington had a quiet day of 3 catches for 22 yards. A good afternoon for the Steelers wide outs. Grade: B

Offensive Line
The beginning of 2020 has been starkly different from the beginning of 2019. With one exception. If there was one positive coming out of last September, it was that the pass blocking of the Steelers offensive line remained stout, even if its run blocking seemed to be slipping. 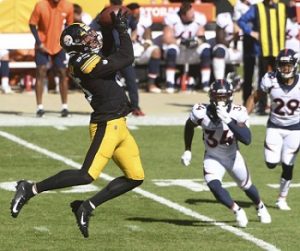 Here in 2020, the same can be said. The Steelers offensive line with Kevin Dotson and Chukwuma Okorafor for the first time provided Ben Roethlisberger with pretty good protection. The run blocking wasn’t there however. This must improve. Grade: C-

Defensive Line
The Broncos had some success rushing the ball early in the game, but credit the Steelers defense for making the necessary adjustments. Tyson Alualu had a sack and continued to prove that he probably brings more bang for the salary cap buck and Javon Hargrave would have. Cam Heyward 4 tackles and split a sack while Stephon Tuitt had 1. Grade: B

Linebackers
T.J. Watt was T.J. Watt with 2.5 sacks in four tackles. Even when he wasn’t sacking the quarterback, he was taking up two defenders, freeing up Bud Dupree to do his damage, as he did on his strip-sack that knocked Drew Lock from the game. Devin Bush led the unit in tackles and batted away a pass but still runs hot and cold in terms of coverage. Vince Williams dropped 3 defenders behind the line of scrimmage. Grade: B

Secondary
Man, are the Steelers going to miss Mike Hilton next year, as he led the team in tackles, recorded a sack, recovered a fumble and defensed a pass. Minkah Fitzpatrick has been quiet this year, and while that’s generally a good thing this unit relies on him for big plays. Fitzpatrick, like Joe Haden and like Terrell Edmunds committed pass interference penalties on drives that ended in scores. While it is too early to worry, the secondary hasn’t jelled the way it did a year ago. Grade: C

Special Teams
Dustin Colquitt’s net punting average was a bit low. And that’s the worst you can say about special teams this week. Kick and return coverage was solid. Ray-Ray McCloud had a 49 yard return showing him to be a legit home run threat. Diontae Johnson had a return for a touchdown negated by penalty, but still managed a zig zaging 18 yard return and tacked on a 24 yard kickoff return.

Chris Boswell was 4-4 on kicks. Against the Broncos Danny Smith’s special teams were a differentiator. Grade: A-

Coaching
In two weeks the Steelers offense has scored more touchdowns than the offense managed in the last 5 weeks of 2019. The exit from the “One Offensive Touchdown a Game” club is welcome.

Going 2-12 on third down conversions is not. This only one game and the 2nd week of the season, but Randy Fichtner’s offense cannot afford to fall into the habit of letting teams hang around that otherwise can be put away.

There’s a similar story on defense. For a second straight week Keith Butler‘s boys have shown they can come up big in the Red Zone when they need to, but they also left opportunities to put the Broncos away on the field.

Two weeks into the season Mike Tomlin has a team that is 2-0 but has yet he is fully aware that his team isn’t firing on all cylinders. That’s wise. Grade: B

Unsung Hero Award
The two biggest plays of the 2nd half were arguably the blocked punt for a safety and James Conner’s long run inside the two minute warning. One man was at the center of them both and for that Derek Watt wins the Unsung Hero Award of Steelers 2020 home opening win against the Broncos.