The Pittsburgh Steelers defeated the Denver Broncos 26-21 to win their home opener with a sloppy effort in a contest where both teams appeared to determined to give the game away to the other. The win improves the Steelers to 2-0 and gives them a share of the AFC North lead.

Certainly, there are positives Pittsburgh can pick out of its win against the Broncos but, by the same token, there are some troubling trends emerging which the Steelers must address. We’ll look at both, but first lets provide a little Steelers-Broncos context. 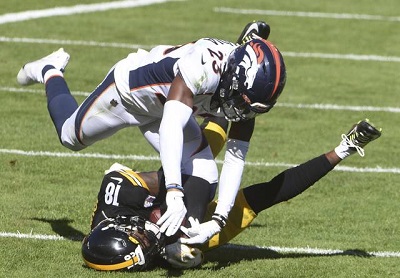 Game Lives Up to Uncanny Nature of Steelers-Broncos History

Let’s start today’s recap with a Steeler history trivia question: What do Mike Tomlin, Bill Cowher and Chuck Noll all have in common? 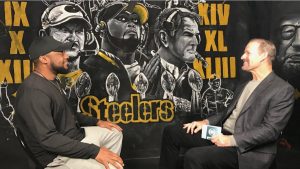 Including playoffs, Noll went 7-11-1, Cowher went 2-4 and Tomlin entered the game with a 2-5 record. So it should surprise no one that then that uncanny things happen when the Steelers play to Broncos.

In 1988, Rodney Carter (who?) had an all-world performance to spark the Steelers and snap a 6 game losing streak. Cramps forced ever durable Dermontti Dawson out of the game leading to a failed Chuck Lanz-Bubby Brister exchanged which doomed the 1989 Steelers Cinderella show.

In 1993 Bill Cowher’s Steelers looked poised to dominate like no one had since ’85 Bears after their Monday Night Football throttling of the Bills, only to get manhandled by the Broncos a week later.

In his rookie year Mike Tomlin would lose Ryan Clark on Monday Night Football for the year due to a freak injury. And who can forget the Tim Tebow game and 2018’s turnover fest?

2020’s edition of the Steelers vs. the Broncos lived up to tradition. The game saw:

And that’s only in the second half, that doesn’t count the Joe Haden setting the Steelers up at Denver’s 11 just inside the two minute warning with the Steelers holding a 14-3 lead. A touchdown there could have effectively ended it at the half. Instead the Steelers settled for 3.

Yes, this game was true to form for the Steelers-Broncos series, but what does it tell us about Pittsburgh’s prospects for the rest of 2020?

Positives for Pittsburgh Coming Out of the Broncos Game

There were w a number of positives for Pittsburgh coming out of the Broncos game.

First, Ben Roethlisberger looked good. Yes, his interception was as boneheaded and as unforced as they come, but Ben does have the tendency to try to do too much.

But Ben Roethlisberger hit 9 different receivers in this game, and has quickly reestablished his rhythm with JuJu Smith-Schuster, while Eric Ebron and Diontae Johnson are gaining their quarterback’s trust. Chase Claypool’s first catch last week was spectacular, and his 84 yard catch and run showed the wideout from Notre Dame is the real deal. 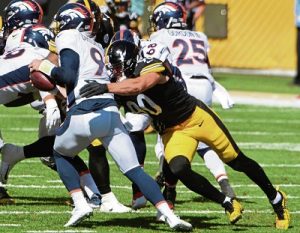 Sure, if you take out his late 59 yard run Conner’s rushing average drops to 3.1 yards per carry, but he ran strong all day, and his big run was a game-sealer – just what you want from your starting running back.

The Steelers offensive line, playing with two new starters, also protected their quarterback well, as Ben Roethlisberger was only sacked once and hit 3 times.

The Steelers defense continues to show that it can harass the quarterback at will, with T.J. Watt, Bud Dupree, Cam Heyward, Mike Hilton and Terrell Edmunds combining for seven sacks.

Just as they did against the Giants, against the Broncos both the Steelers offense and defense proved they could make big plays at key moments.

That’s how the half-full glass looked against the Broncos. Now for the other half.

Self-Inflicted Wounds and a Few Troubling Trends for Pittsburgh

Pittsburgh produced a lot of ugly plays against the Broncos. The “good” news there is that many of those wounds were self-inflicted. Six of the Denver Broncos 17 first downs were from penalties. Several of those came on third down.

Benny Snell has now fumbled twice in two weeks. Last week a heads up play by JuJu Smith-Schuster rendered that fumble nothing more than a footnote, but ball security has been Pittsburgh’s Achilles Heel since 2018 and it came close to taking them down again today.

And if the offensive line did do a reasonable job of pass blocking today, too often James Conner simply had no room to run. The Broncos defense registered 6 tackles for losses – a tendency which cannot continue because these plays inevitably set up long first downs.

Ben Roethlisberger has played better than anyone would have a right to expect a 38 year old quarterback coming off of elbow surgery to play.

Some of this is certainly by design, but there were other times when Ben Roetlisberger had plenty of time to throw, yet could not find or did not attempt to throw to an open receiver down field. The bottom line is that the Steelers finished the game 2-12 on third downs, which simply won’t do.

The  Grumpy Old Man preseason apologist in me has no qualms about chalking up some of the Steelers sloppiness of the last two weeks to a lack of preseason football. The Steelers were fortunate that the schedule making gods of the NFL gave them season openers against two rebuilding teams.

The Texans finished 10-6 last year and the fact that they’ve started 2020 0-2 only serves to underline how big of a chip they’ll be carrying into Pittsburgh. In his post-game press conference Mike Tomlin conceded “We’ve got a lot of growth ahead of us,” but then couched his self-criticism with “But it’s good to grow while you win.”

True. Its also true that the Steelers need to do speed up the former if they want continue to enjoy the latter in the weeks to come.