The Pittsburgh Steelers beat the Houston Texans 28-21 at Heinz Field, as brothers T.J. and Derek triumphed over big brother J.J. in the Watt Bowl.

But the nicest part about this win lies in the recipe the Steelers mixed during the Watt Bowl to secured victory down the stretch, as we explain below. 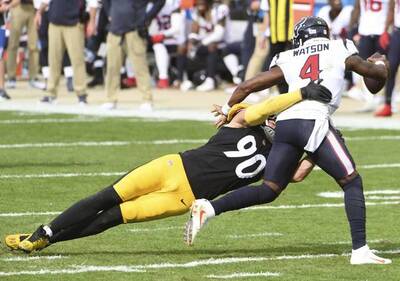 Week 3 is a Curious Place in the NFL

Week 3 is a curious place in the NFL. The math makes it simple. On week one, 50% of the teams must win and 50% must lose. Week two typically clarifies little. Everyone is either winless, undefeated or .500. Not much room for anyone to stand out.

Trends start to confirm themselves in week three, as teams find rhythm, establish personality, and the law of averages begins to weed out the “On Any Given Sunday” element from scoreboard results.

The Steelers entered week 3 with a 2-0 record, while the Houston Texans arrived in Pittsburgh at 0-2.

As the first half end, it things could easily go either way.

The first two weeks saw the Steelers both give their fans a lot to like while leaving a lot plays on the field. During the first half against the Texans, they followed the same script in a topsy-turvy 30 minutes that saw: 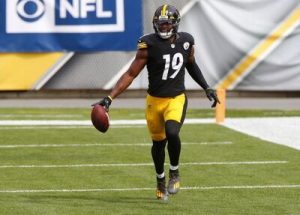 With 2:38 left in the half, Ben Roethlisberger did one of the things he does best – run an effective two minute drill, mixing and matching James Conner runs, short passes to James Washington and Eric Ebron before hitting JuJu Smith-Schuster for a walk-off touchdown. The Steelers were up 17-14 at the 1:14 mark.

Not quite. It was the Steelers defense’s turn to stumble, as Deshaun Watson surgically ripped the Steelers defense apart, completing passes in coverage against Mike Hilton, Terrell Edmunds and Minkah Fitzpatrick to put the Texans back up 21-17 at the half.

These were exactly the types of slips the Steelers suffered during the first two weeks. And unlike the Giants and Broncos, it did not appear that the Texans would be so forgiving.

Steelers Methodically Impose Their Will in 2nd Half

Pittsburgh’s problem in recent years has been a chronic inablilty to put teams away. Sometimes they’ve gotten away with it (remember those Chris Boswell game winners in 2017?). Other times Pittsburgh has paid the price (see the 2nd half of 2018.) Last week, the Steelers had the Broncos on the ropes, only to let them back in before escaping with a victory.

Things started slowly. The Steelers opened with a scoring drive that included that included flashes from rookie Anthony McFarland Jr.. Still, after spending 5 minutes on the field, the Steelers were forced to settle for a field goal. 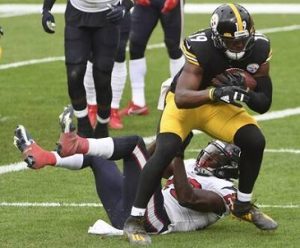 But Keith Butler’s boys answered the call responding with:

With 13:27 left to play and starting at their own 21, the men in Black and Gold did something that has been the hallmark of championship Steelers football – They Imposed Their Will.

By Mixing runs and short passes and getting key third down conversions from Benny Snell Jr. and Vance McDonald, the Steelers methodically moved down the field, keeping the chains moving and the clock running.

By the time James Conner barreled into the end zone for a 12 yard touchdown run, the Steelers had physically dominated the Texans and burned 7 minutes off of the clock in the process, while JuJu Smith-Schuster added a 2 point conversion to make it 21-28. 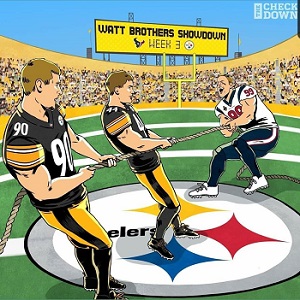 T.J. and Derek prevailed over JJ in the Watt Bowl

Living in Our Hopes, Not in Their Fears

There’s something poetic about Houston’s final series in the Watt bowl starting with a 11 yard sack by T.J. Watt; that made it a question of “When” and not “If” the Texans would punt.

James Conner started the drive off with a 25 yard run. To Bill O’Brien’s credit, his Texans declined to fold. In response, Mike Tomlin refused to blink.

On 4th and 1 at Houston’s 35 with 3:11 remaining, Mike Tomlin not only went for it, Ben Roethlisberger threw the ball to James Washington who converted the down. Three plays later, the Steelers had a 3rd and 9 at their Houston’s 26. The smart money here says pound it up the middle, let Chris Boswell tack on 3 points and let Houston try for two scores in 2 minutes.

Putting up ten points in a half hardly qualifies the Steelers as the next incarnation as “The Greatest Show on Turf.” But combined that with a 2nd half defensive shut out, turnover free football and 36:51 to 23:09 time of possession advantage, and during the Watt Bowl the Steelers may have mixed a recipe for winning football.