If you’re a Steelers fan, you have to admire all that running back James Conner has had to overcome to even be in the NFL.

A star running back at the University of Pittsburgh, Conner suffered a season-ending ACL tear in 2015, an injury that actually led to doctors discovering that he had cancer. Conner battled through all of that adversity to not only defeat cancer and the injury but to become a third-round pick by the Steelers in the 2017 NFL Draft.

But even such a heartwarming story only has so much traction in the very cynical world of sports, and Conner has said himself that he doesn’t want to be defined by his battle with cancer. He wants to be defined as an NFL running back.

Much like a lot of things about James Conner, I can respect that. But if he is sincere in that sentiment, he must respect the opinions of folks –many of whom are admirers of his — who no longer think he should be the Steelers starting running back. 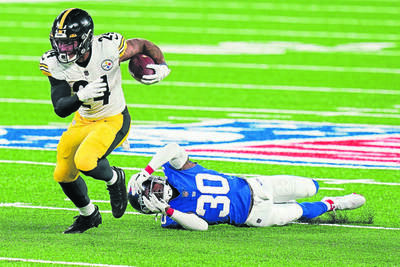 Benny Snell smokes Darnay Holmes in the Steelers win over the Giants. Photo Credit: AP via the Tribune Review

That should be Benny Snell Jr., and that should be as soon as this Sunday’s Week 2 match-up against the Broncos at Heinz Field.

Conner looked timid and unsure of himself in the early moments of Pittsburgh’s 26-16 Week 1 victory over the Giants at MetLife Stadium on Monday Night Football. After gaining just nine yards on six carries, Conner was removed from the game and never returned. It was later revealed that he suffered an ankle injury.

Conner suffered an MCL tear late in his rookie season. OK, fine, Le’Veon Bell was the bell cow running back in those days, and Conner barely saw the field on offense prior to his injury. But in 2018, after the Steelers had grown used to Conner’s tremendous production in the wake of Bell’s season-long contract holdout, the Pro Bowl-bound second-year back missed several games down the stretch due to a concussion and an ankle problem. 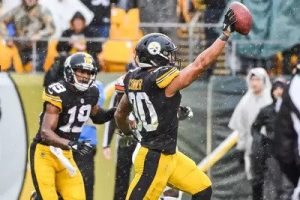 And in 2019, when the Steelers really needed to lean on a workhorse running back following the season-ending elbow injury suffered by quarterback Ben Roethlisberger, Conner once again proved to be unreliable, as he battled a myriad of injuries and missed a total of six games.

If you’re the Steelers, how can you work with that?

Conner did lead the Steelers in rushing yards a year ago with 464. But Snell finished with 424 yards and didn’t start to see an increased workload until late in the season.

Snell built on that late-season momentum by losing 12 pounds this past offseason and looked fast, quick and explosive during most of his 19 carries on Monday night. The sentiment held by many in the local Pittsburgh sports media is that Snell really is the best running back the Steelers currently have, but that Conner will get the starting nod this Sunday, provided he’s healthy.

If you’re the head coach, it’s your job to put the best players on the field in-order to give your team the greatest chance to win. I don’t know how Tomlin can possibly say Conner is his best running back at the moment.

It’s so obvious that it’s Snell.

That’s my story and I’m sticking to it.