Taken from the grade book of a teacher who is proud to see his student diligently working until the bell, here is the Pittsburgh Steelers Report Card for the 2020 home win over the Cleveland Browns. 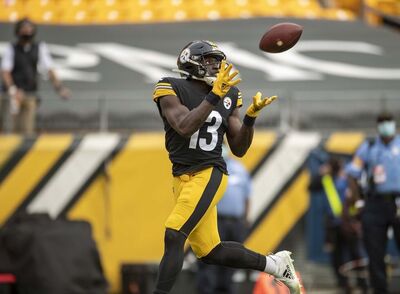 Quarterback
Ben Roethlisberger struggled a bit early with the RPOs. But once he settled down he played efficient football and continued to take care of the ball completing 14 of 22 for one touchdown and, most importantly, no interceptions and no fumbles. Mason Rudolph competed his 1 pass in mop up duty. Grade: A-

Running Backs
James Conner hit the holes hard putting the Browns on notice that this was a going to be a physical game. He finished the day with 101 yards on 20 carries while adding in another catch. Benny Snell only got 17 yards, but he helped close the game. Anthony McFarland had 3 carries and 1 catch. Grade: A

Tight Ends
Eric Ebron had quiet day with two catches for 9 yards and Vance McDonald was not targeted. Cleveland’s front seven is a stout group and Ben Roethlisberger was clean and running backs had room to run and the tight ends certainly contributed to that. Grade: B

Wide Receivers
Chase Claypool followed up on his breakout game with a 36 yard reception that set up one touchdown and a run that scored another touchdown. The Browns decided they didn’t need to worry about James Washington, and Washington made them pay with 4 catches including a 28 yard touchdown reception. JuJu Smith-Schuster had 2 catches for 6 yards. Grade: A

Offensive Line
5.1 yards rushing, 4 quarterback hits and 2 sacks – all against one of the NFL’s best front seven groupings and with their best player, David DeCastro, out injured. An excellent day for the Steelers offensive line. Grade: A 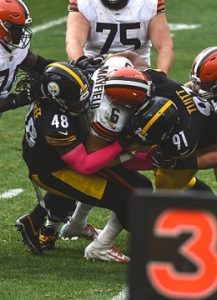 Defensive Line
He might not get ink that some of the other players on this unit get, but Stephon Tuitt is quietly piecing together a monster season. Against the Browns he had a half sack, two and half tackles behind the line of scrimmage 2 QB hits and a forced fumble. Cam Heyward led the team in tackles and pushed more than one pile back to deny conversions. Officially Tyson Alualu had one half of tackle behind scrimmage, but the Browns inept rushing numbers tell a different tale. Chris Wormley only had one tackle, but he stuffed his man. Grade: A

Linebackers
Vince Williams was next with 6 and 1 for a loss. Devin Bush only played a half before tearing his ACL, but that was enough for half of a sack, a QB hit and a five tackles. Bud Dupree had two sacks while T.J. Watt clocked in with 1.5 tackles behind scrimmage. Grade: A

Secondary
Minkah Fitzpatrick started the game with a tone setting pick six that the Cleveland offense never really overcame. Terrell Edmunds name wasn’t heard much, which is a good thing, but he did bat away a pass. How good were Joe Haden and Steven Nelson? Jarvis Landry and Odell Beckham Jr. combined for 5 catches for 65 yards. Cam Sutton had an interception. That Browns were 1-12 on third down. Grade: A

Special Teams
Ray-Ray McCloud and one kick return for 28 yards and 3 punt returns that averaged 12 yards. The Browns averaged 3 yards on two punt returns and 20 yards on kick returns, due in no small part to Chris Boswell pinning the Browns inside their own 20. Dustin Colquitt averaged 41. Yards on 5 punts. Grade: A-

Coaching
Throughout his tenure Mike Tomlin has responded to challenges about the lack of balance on his offices by explaining that balance on offense for him is the offense becoming what it needs to be.

The Steelers dominated time of possession, established a rhythm rushing the ball effectively, pivoted away from RPOs that weren’t working, converted turnovers and used deep passing to set up two touchdowns. They also kept their quarterback clean when they were down a lineman. 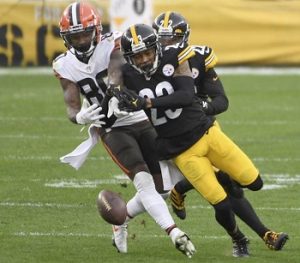 The Steelers defense has been a step behind the offense thus far in 2020, but against the Browns Keith Butler‘s boys virtually eliminated 3rd down conversions correcting a major flaw. The defense must sustain this against stiffer competition, but it stands as clear positive.

The 2020 season is still young and tough tests await them, but the Pittsburgh Steelers played their toughest opponent thus far in the Cleveland Browns and they delivered their best performance. They started out decisively on defense, refused to blink when things didn’t go right on offense and even when they were up by 31 points they play as if the game could still be decided by a field goal – all to Mike Tomlin’s credit.

Unsung Hero Award
“We don’t have backups, just starters in waiting.” There’s another cliché that became true with two minutes left to play in the 2nd half against the Browns when Devin Bush went down. His replacement stepped in and actually led the linebackers in tackles, registering 6, including 1 for a loss. Teams will certainly start targeting him early and often, but he answered the call against Cleveland and for that Robert Spillane wins the Unsung Hero Award for the win over the Browns.