Before the Steelers set foot in Nissan Stadium to take on the Titans in a battle of unbeatens last Sunday, many wondered just how credible of a contender Pittsburgh was.

The Steelers’ first five victories came against teams that were either suspect–the Giants, Broncos, Texans and Eagles — or the Browns.

However, thanks to a 27-24 victory over Tennessee, the Steelers are now not only the lone undefeated team in the NFL heading into Week 8, but they’re also legit for real. 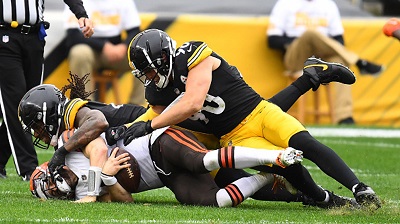 Many people may not even remember this, but Cleveland went into M&T Bank Stadium early in the 2019 season and beat up the Ravens pretty good. You might say it was a bit of a statement game for the Browns, if not for the fact that nobody remembers it. Why? Because Cleveland then went out and lost four-straight games to the 49ers, Seahawks, Patriots and Broncos, respectively.

OK, if you wanted to be fair, you could say the Browns were a young team, still searching for answers. Maybe the true answers came in the form of a 21-7 victory over the Steelers in the infamous Body Bag game. It was Thursday Night Football. It was nationally televised. It was controversial. Garrett became both a villain and a hero to many at the same time.

The only thing left for the Browns to do was finish the job 17 days later in the rematch at Heinz Field. A victory would not only improve the Browns’ record to 6-6, it would also put them in a prime position to earn a playoff spot.

What happened? The Browns, those upstarts, those offseason champions, those Hard Knocks heroes, couldn’t knock off the Steelers and the third-string quarterback — Devlin Hodges — who replaced Mason Rudolph, the backup quarterback who helped to turn Garrett into both a villain and a hero at the same time.

As for the Browns. They went on to lose three of their last four–including a rematch against the Ravens at home–to finish the season at 6-10. They had regressed from their 2018 record of 7-8-1.

Fast-forward to 2020, and the Browns are now 5-2 and look to be in great shape to earn a trip to the playoffs for the first time since 2002. Where’s the respect? Where’s the hype?

Maybe those things don’t exist right now because Cleveland’s two losses came against their two biggest rivals–the Ravens and Steelers–and by a combined score of 76-13.

Also, two of the Browns’ victories were against the Bengals — and just barely.

Is it any surprise that the Steelers, just one year after barely missing the playoffs without an injured Ben Roethlisberger, are now the only undefeated team in the NFL?

Are you ever truly shocked when Pittsburgh takes on a juggernaut like the Titans and wins?

Maybe that’s the difference between the two teams. Until that changes, no respect will be coming the Brownies’ way.