That was Steelers head coach Mike Tomlin’s response during a virtual question and answer session with reporters on Thursday when asked his thoughts on the possibility of his team playing 13-straight games to end the season, thanks to the Week 4 game against the Titans being postponed due to 11 members of that organization testing positive for COVID-19. 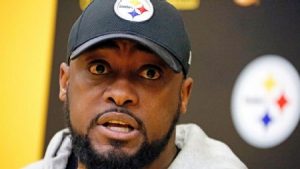 Not to sound old — and I am a member of Generation-X, which means I’m now getting there — but I remember the days when teams played 16-straight regular season games without a bye. Nobody thought anything of it. Nobody rattled off stats about how teams that had their byes after a certain point in the season had a greater chance of winning a Super Bowl than teams who had them much earlier.

I realize this is a new era, and the physical toll the game of football takes on players is far too extensive to ignore. I know the health and safety of these athletes is paramount. I do have a heart. I’m not rotten to the core.

But that’s not what everyone is really worried about when they suddenly “concern” themselves with the brutality these Steelers players will potentially be putting themselves through over the course of thirteen weeks.

They’re worried about how it will affect Pittsburgh’s chances if it makes the postseason for the first time since 2017, something that seems quite likely now, thanks to a 3-0 start to the 2020 regular season.

I get it, but I also know of a lot of people who get concerned when a team earns a postseason bye— “Oh no, it’s going to ruin their momentum!”

There are folks who simultaneously worry about a team playing on a Thursday night because they think the quick turnaround from the previous Sunday will hinder its chances of winning and also worry that the team will be rusty for the next game thanks to the extra days off.

It’s not just the fans, either. Yes, at the moment, Coach Tomlin and his players may say they’re not worried about playing 13 weeks in a row, but let’s see what their attitude is, come January, when game number 14 is of the playoff variety.

When it comes to too much time off vs. playing too many games in a row, you can always find an excuse for poor play with either scenario if you really want to.

The fact of the matter is, if someone wouldn’t have pointed out on Thursday how potentially damaging it could be to the Steelers if they didn’t get some time off between now and the end of the season, it never would have crossed my mind that it could be detrimental to their health and/or their chances at a playoff run.

If the Steelers really want to guarantee themselves some time off right before the playoffs, they need to keep winning and earn that precious number one seed—the only one that now comes equipped with a bye.

Wait a minute, what if that extra week off leaves them rusty for the divisional round…….?