Taken from the grade book of teacher who worries his defense students are getting too comfortable pulling things out with all nighters, here is the Pittsburgh Steelers Report Card for the win over the Eagles. 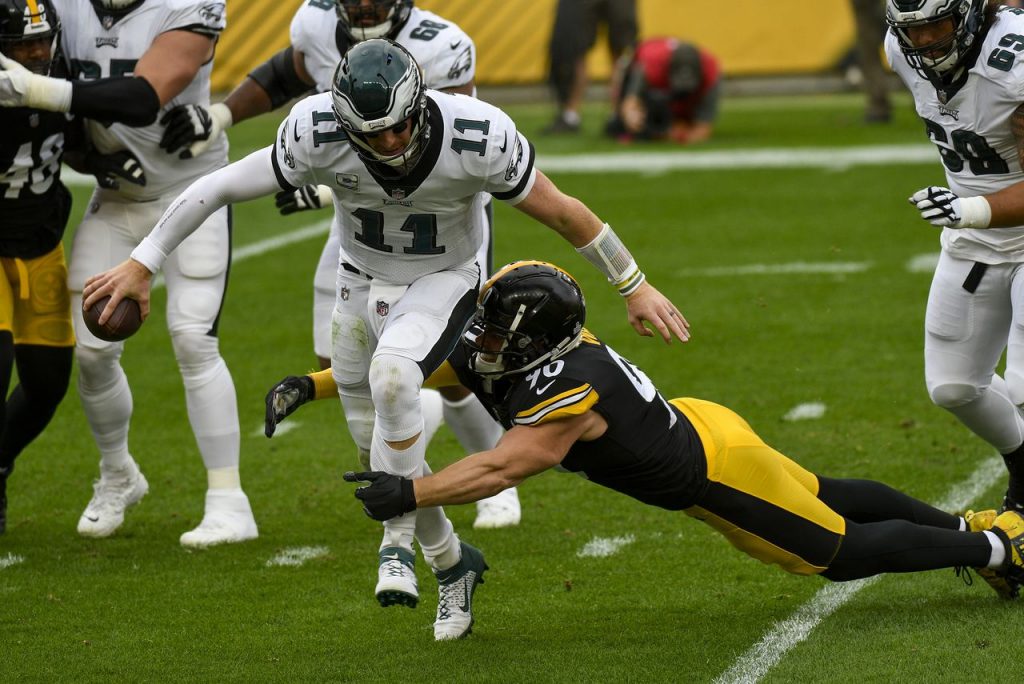 Quarterback
Ben Roethlisberger went threw 34 passes for 27 completions for 239 yards and 3 touchdowns. The Steelers converted 11 of 15 third downs and Roethlisberger took care of the ball. His audible on 3rd and 8 in the 4th quarter with the game in the balance was a veteran move that sealed the win. Grade: A

Running Backs
The Eagles have ones of the strongest front 7s in the league so it figured this would be tough sledding. And it was. None of the Steelers running back’s rushing averages impress. But if you look beyond the numbers and at the tape, you’ll see that James Conner  and Anthony McFarland all had some respectable runs. Benny Snell gained tough yards to kill the clock at the end. Conner also added 3 carries and scored the go ahead touchdown. Grade: C+

Tight Ends
Eric Ebron was having a nice day for himself with a 5 catches for 43 yards but he coughed up the ball at a critical time. He also failed to pull in a pass that was incorrectly ruled as an interception. Vance McDonald had one catch for 4 yards, but was an asset in the blocking game. Grade: C

Wide Receivers
JuJu Smith-Schuster and James Washington had pedestrian games with 4 and 3 catches for 28 and 25 yards respectively. Ray-Ray McCloud had 3 catches but did his damage on two “Jet Sweeps” one of which went for 58 yards. But that wasn’t the big story of the day.

After looking solid in the first 3 games Chase Claypool announced his presence to the NFL with a bang with 7 catches for 110 yards and 3 touchdowns in the air plus another touchdown on the ground. Grade: A

Offensive Line
The only team that had sacked the quarterback more than the Steelers coming into this game was the Eagles. Yet Ben Roethlisberger was only dropped once the entire afternoon and he was only hit two more times per ESPN’s statistics. Run blocking could have been a little stronger, but overall it was a good day for the line, especially considering that David DeCastro was lost for most of the game. Grade: B

Defensive Line
Cam Heyward had two sacks, defensed a pass and logged another quarterback hit while Tyson Alualu added another two tackles. Take away Miles Sanders 74 yard run and the Eagles managed 1.33 yard per carry, and that starts with the defensive line. Grade: B+

Linebackers
T.J. Watt had another “quiet” day with “only” 3 tackles for losses in between a sack early on and a key pressure that helped force an interception. Bud Dupree also came up big with a half sack on the Eagles final drive. Vince Williams and Devin Bush had 2 and 3 tackles apiece. Steelers linebackers made their plays, but also must shoulder the blame for the long run given up along with the Eagles ease with 3rd down conversions. Grade: B 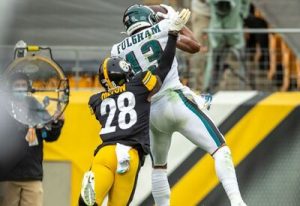 Secondary
Who is Travis Fulgham? Mike Tomlin claims the fellow Virginian was on his radar but can the same be said for anyone else? Who knows? We do know is that smoked the Steelers for 10 catches and 152 yards and a touchdown. Steven Nelson, Mike Hilton and Joe Haden all had their issues with the kid. Hilton also missed a tackle on Miles’ touchdown run. Minkah Fitzpatrick also missed a tackle because he failed to rap, leading to a 3rd down conversion. The Steelers pass defense did secure two turnovers, but it is allowing just under 13 yards per pass catch – far too much. Grade: C- 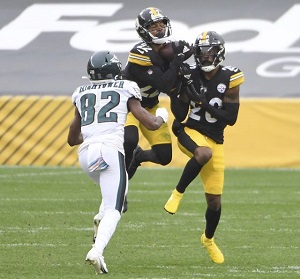 Whether it is because of Matt Canada’s influence or not, Randy Fichtner continues to find ways to innovate, as the Steelers neutralized the Eagle’s stout front seven with bunch formations and Jet Sweeps. The Steelers offense scored 4 touchdowns on its own, converted another turnover into a touchdown, and killed the clock when it had to.

The Steelers defense doesn’t lack for Splash plays, as their 5 sacks, 2 interceptions, 11 quarterback hits and eight tackles for losses testify. But four games into the season opponents are converted third downs with relative ease, the Steelers are regularly giving up long passes and quick touchdown drives have been too common.

Whether that’s because Joe Haden is losing a step, Devin Bush isn’t developing fast enough or opponents are exploiting the Steelers love of the blitz, Keith Butler needs to take a hard look at his pass defense.

With that said, going 4-0 in the NFL is and accomplishment. It doesn’t happen by accident. The Steelers of late have been rusty coming off of their bye week, yet even if this bye came unexpected, no rust was evident, to Mike Tomlin’s credit. Grade: B

Unsung Hero Award
The Eagles had scored 15 unanswered points to cut a 17 point deficit to a 2 point deficit and the Steelers had JUST fumbled the ball back to Philadelphia. It was 1st and 10 at the Pittsburgh 44. Carson Wentz had a man open down field but didn’t quite have time to release because he was sacked for a 3 yard loss.

Sure, the Eagles made 8 of those yards back, but the sack meant Jake Elliot had to try a 57 yard field goal instead of a 54 yard one and those three yards might have been the difference. Stephon Tuitt made that sack and for that he wins the Unsung Hero Award for the Steelers win over the Eagles.