From the grade book of a teacher who hopes his students don’t learn the long lesson from their experience of starting strong, stumbling badly and still passing, here is the Pittsburgh Steelers Report Card for the 2020 win over the Titans. 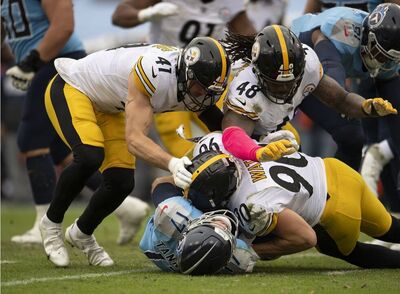 Quarterback
Ben Roethlisberger started this game as he had so many others this year – on fire. By Jim Wexell’s calculation’s Big Ben had a passer rating of 99.4 in the first half, and 17.0 thereafter. His interceptions alone accounted for a 6 point swing. To his credit Roethlisberger manned up after the game, but that doesn’t count as “extra credit for showing your work.” Grade: C-

Running Back
James Conner had 82 yards on 20 carries and ran strong in addition to 3 catches for 29 yards. Benny Snell only had 2 carries, but found paydirt on one of them with a touchdown. Jaylen Samuels returned to the offense and got 5 yards on his only carry. Anthony McFarland 6 yards on one carry. Grade: B

Tight Ends
Vance McDonald had two catches for 14 yards while Eric Ebron had 6 catches for 50 yards, while Jerald Hawkins sealed the corner on Snell’s touchdown playing as the third tight end. Grade: B

Wide Receivers
JuJu Smith-Schuster and Diontae Johnson did something that not easily measured by statistics – they showed that the can and will make opposing defenses pay for double-teaming Chase Claypool. JuJu Smith-Schuster had 9 catches for 85 yards and they were combat catches. Diontae Johnson also had 9 catches for 80 yards, but he also scored two touchdowns. Ray-Ray McCloud had 2 catches for 12 yards. The one combat catch that JuJu missed was the end zone touchdown, and that brings this group’s mark down. Grade: B

Offensive Line
Ben Roethlisberger wasn’t sacked the entire day and he was only hit 3 times per ESPN’s stats. James Conner and the other running backs ran very well in the first half and the line had a lot to do with that. Their rushing average plummeted in the 2nd half, which contributed to two very short drives when clock milking was in order. Grade: B-

Defensive Line
Derrick Henry is, daresay, a running back cut out of the Jerome Bettis mold, yet agaisnt the Steelers he only managed 3.8 yards a carry. Certainly some of that is due to the Titans playing from behind, but part of the reason they were behind late was because Henry couldn’t get started early. Cam Heyward and Stephon Tuitt’s stat sheets are slim, but they impact was deep. Grade: B

Linebackers
T.J. Watt had a sack and dropped Henry for losses twice the second of which was a key play in forcing a punt. Bud Dupree’s name doesn’t appear on the stat sheet, which is strange, but he was tasked in part with helping ensure Henry remained contained. The real hero of the day is this unit’s work horse, Vince Williams who led the team with 10 total tackles, a sack and another tackle for a loss. Grade: B+ 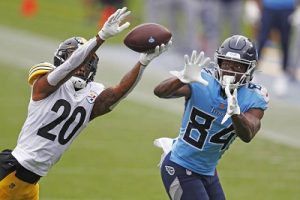 Secondary
Joe Haden, Cam Sutton, and Terrell Edmunds all batted away passes at critical moments. Joe Haden made some critical stops on the final drive. Steven Nelson’s name was seldom heard which is very much a good thing. However, the secondary gave up a 70 yard touchdown which came early enough to allow Tennessee to get back in the game. Minkah Fitzpatrick either slipped or perhaps hesitated and A.J. Brown outran the rest of the secondary. These types of slips hurt. Grade: C

Special Teams
In his return to Pittsburgh Jordan Berry averaged 50 yards on two punts, delivering an immediate improvement. The Steelers kick and punt coverage remained strong. Chris Boswell was 3 for 3 on PATs and hit two field goals. The special teams also quashed an impromptu fake punt attempt. The real star was Ray-Ray McCloud, whose 57 yard punt return gave the Steelers an easy score inside the 2 minute warning. That’s 9 points score by special teams and another 6 directly set up by special teams. Excellent. Grade: A 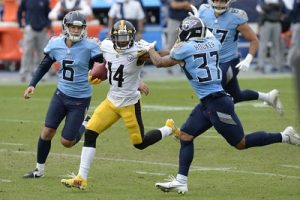 Coaching
Randy Fichtner’s offense did what it had not done in 24 games, score a touchdown on its opening drive. This immediately knocked the Titans off of their game, which is to ride Henry from ahead. The Steelers offense authored drives of 9, 7 and 7 and a half minutes.

Keith Butler was forced to play without two critical players, in Mike Hilton and Devin Bush, and knew his run defense would be tested by the NFL’s best rusher. The Steelers defense proved to be up to the task, and their early shut downs of the Titans offense were critical to establish and padding a lead which would become quite slim by the end of the afternoon.

When a team is on the road, goes negative 3 in the turnover category, gives up a 70 yard touchdown pass and STILL wins to remain undefeated, you suspect the coaching staff is doing something right. But when that team’s players exit the game with a humble, rather than triumphant attitude you simply have to credit head coach Mike Tomlin. Grade: B

Unsung Hero Award
OK. We’ve given the coaches their due. But there’s another reason why a team can turn the ball over so many times, give up long touchdowns and still win. It’s because of plays like this:

Sure, the Titan’s scored two plays later. It doesn’t matter. Good things happen to teams who see their heretofore no-names take on NFL All Pros head on and win and for that Robert Spillane wins the Unsung Hero Award for the Steelers win over the Titans.