The Pittsburgh Steelers take on the Dallas Cowboys this Sunday afternoon at AT&T Stadium. 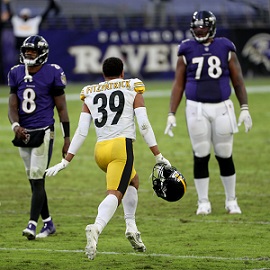 The Steelers (7-0) will face a Dallas squad that will be down to either its fourth or fifth-string quarterback, depending on who starts and where you want to rank the candidates: Cooper Rush and Garrett Gilbert.

Pittsburgh is a two-touchdown favorite to win this game and improve to 8-0. As far as many are concerned, the Steelers should be doing so well in this contest that Mason Rudolph gets his most extensive work since starting eight games for the injured Ben Roethlisberger a season ago.

I can see that. I can get behind that. I’m fairly confident these Steelers will walk into the JerryDome and leave with a thoroughly enjoyable blowout victory against America’s Team.

But what about the annual Tomlin loss? In case you don’t know, a “Tomlin loss” refers to a defeat, usually on the road, against an inferior opponent. This is the kind of loss folks didn’t see coming early on in the career of head coach Mike Tomlin, but it has become so prevalent over the years — think the Chiefs in 2009, the Raiders in 2009 or the Browns in 2009 (wow, there were many such losses in 2009) — that fans just naturally begin to circle possible candidates on the schedule the moment it’s released every spring.

Unfortunately, the game against Dallas (2-6) marks the first of three-straight match-ups that can only be described as trap games. After the Cowboys, Pittsburgh will take on the Bengals (2-5-1) and the Jaguars (1-6 heading into this Sunday’s action) before the epic rematch with the Ravens on Thanksgiving.

Plenty of opportunities for the fans and the media to worry about and speculate on the possibility of the team’s first loss of 2020. After all, if it’s going to happen, it’s going to happen against a team that Tomlin will not have his players ready for.

I’m not trying to be all rah rah about the Steelers. I get that it’s natural to always think about the worst-case scenario, but my goodness, Pittsburgh is 7-0 for the first time since Star Wars was gripping the nation, and all we can talk about is a possible first loss?

If you’re looking at 1978 (the year I alluded to in the previous paragraph) in a superstitious manner, the Steelers first loss really should happen this Sunday in Dallas. The eighth game was when the eventual Super Bowl champions suffered their first defeat in ’78.

If it’s not in Dallas, surely it will happen against the Bengals and their stud rookie quarterback, Joe Burrow. OK, but these are the Bungals, right? No way Pittsburgh will give up its chance to make history by losing to them. Fine, but those Jags are always a pain in the butt.

Maybe it will happen over these next few games, but I don’t think we need to sit around and worry about it. One thing these 2020 Steelers seem to be is extremely focused. Yes, many games have been a little too close for comfort, so far, but, believe me, Pittsburgh isn’t alone in that category.

Enjoy the ride. Will a loss happen? Probably–the odds suggest that it will happen sooner rather than later. However, that’s for the Steelers to worry about.

As for you, just enjoy those undefeated Pittsburgh Steelers.

Not many NFL fans get to do that in November.