I suppose it’s normal for Steelers fans to worry about things like whether the team should lose its first game to, you know, take the pressure off. 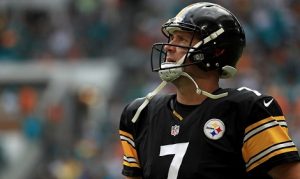 It’s probably been a common concern throughout history for most fanbases of teams that, like Pittsburgh, have made it through nine games without a single defeat. I get it, you feel the pressure, it’s enormous. It’s like a balloon that continues to expand every week.

But, most importantly, you just think they need to get that first loss out of the way before the playoffs. Does matching the 1972 Dolphins’ feat of going undefeated all the way through the Super Bowl matter? It does if Pittsburgh can actually pull it off, of course.

However, what if the Steelers get through the regular season without a single mark in the loss column–something that only the ’72 Miami team and the 2007 Patriots have been able to pull off in the modern era–but lose in the postseason? That fate befell the ’07 New England team, and it happened in the waning moments of Super Bowl XLII. The Patriots went from 18-0 to 18-no! thanks to former Steeler Plaxico Burress‘s championship-clinching touchdown catch with just seconds remaining.

In many ways, that loss to the Giants shaped New England’s extended championship run–some say it’s the greatest dynasty in the history of professional sports–as much as those six Lombardi trophies.

But at least the Patriots endured that loss in the middle of what would turn out to be an unprecedented Super Bowl era.

Why? Do you think the Steelers will feel any less pressure if they enter the postseason with a loss or three on their record?

Former players whose teams got off to similar starts to the Steelers have talked about the enormous pressure they felt and how that all seemed to go away with a loss. But with all due respect to folks who experienced something I admittedly never have, they were going to experience the weight of the playoff moment whether they entered the dance with one loss, four losses or zero losses.

Once you’re in the playoffs, the pressure one feels is like the wetness one experiences while submerged in water–wet is wet.

It’s the postseason. It’s do or die. It’s win or go home. When it comes to the Steelers, they always feel the pressure to succeed in the playoffs. And it’s not just making it there and winning a game. It’s not just advancing to the Super Bowl. Nothing but a Lombardi trophy and a parade (excluding this year, I’m guessing) will ever be good enough.

I don’t know why the Patriots lost in Super Bowl XLII, but I’m pretty sure it wasn’t because they were under overwhelming pressure to go undefeated. Were they asked about their chances of going 19-0 a lot over the course of the season? Yes, but it didn’t seem to get in their way until they met up with a Giants team that had a great front-four that made life miserable for Tom Brady.

While speaking with the media on Wednesday, Steelers quarterback Ben Roethlisberger said the team’s goal was to win a Super Bowl, not go undefeated.

It will be the goal this postseason, as well, whether the Steelers enter undefeated or not.