A downside to going undefeated is that stories predicting your first loss begin to ellipse ones detailing why you’re winning. And so it is with the 2020 Pittsburgh Steelers. No matter who the opponent was this week, the question was going to be “Has the upset arrived?” Now, stir in a little history and the plot thickens:

That habit started in the first meeting between the two franchises and carries through to Pittsburgh’s most recent playoff experience. Steel workers it would seem, make poor Jaguar hunters.

The Steelers 27-3 win over the Jaguars certainly wasn’t spotless, but that’s actually a feature rather than a flaw. Let’s see why. 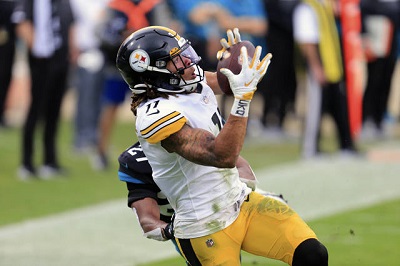 Chase Claypool catches a touchdown for the Steelers. Photo Credit: AP via Tribune-Review

Some Fine Football Footnotes, Courtesy of Luton and Robinson

The true history of world events is often told through the footnotes. In the NFL? Not so much.

History will little note that Jake Luton completed his first 2 passes for double-digit yardage, nor will it remember that James Robinson began the game by gouging the Steelers defense for double digit runs. Had Jacksonville won, scribes like me would have described this pair of unheralded rookies as “Setting the tone with their decisive play during the game’s opening drive.” 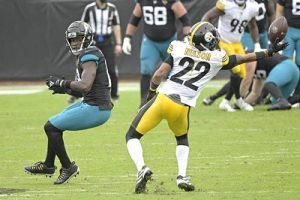 That’s because NFL history isn’t written by teams who can make a handful of good plays; it is made by teams who make plays consistently. Or at least make them at critical moments in games. During the first half against the Jaguars, the Steelers fell into the latter category by:

Those efforts paved the way for Chris Boswell to make a 44 yard field goal after missing a 45 yarder, for Ben Roethlisberger to hook up with Chase Claypool to give the Steelers the lead and later to connect with Diontae Johnson to set up a one yard Benny Snell touchdown to give the Steelers a 17-3 lead just before the half.

Yet if the Steelers had done some opportunistic playmaking in the game’s first 30 minutes, the last 30 seconds reinforced just how much they’d left on the table.

Terrell Edmunds intercepted Jake Luton with 36 left to play. Ben Roethlisberger brought them within field goal range, yet threw an interception to Daniel Thomas. Instead of taking a 24 or 17 point and 3 score lead into half time, the Steelers were standing pat with just 14.

14 points is a healthy yet hardly insurmountable half time lead. And 14 points becomes even less insurmountable when you when start the half by getting the ball and then promptly run 3 plays for negative 1 yards. The worst thing you can do with a young team is to let them hang around, yet here were the Steelers, opening the door for Jacksonville to come roaring back into the game.

For a few moments, it seemed liked they might. After limiting the Steelers to negative one yards, Jacksonville advanced from their own 31 to Pittsburgh’s 41 in six plays. Now, those six plays were hardly worthy of John Facenda narration, but the Jaguars were stalking their way up the field with confidence. Then they blinked:

The Steelers gave Jacksonville a chance to get right back in this game, and the Jaguars squandered it. Now all that remained was for Pittsburgh to close the deal. 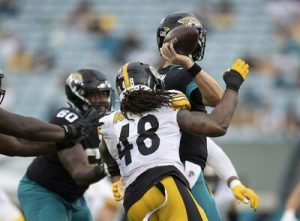 Football games evolve at their own pace and in this case that meant that Jordan Berry would punt four more times during the second half, that the Steelers would have to wait until the 4th quarter to put more points on the board and those next points would come off of Chris Boswell’s leg.

But the offense’s difficulty scoring didn’t matter much, as the Steelers defense dominated the Jaguars en every sense of the word, whether it was Bud Dupree sacking Luton on third down, T.J. Watt and Cam Heyward  stoningJames Robinson at the line of scrimmage, or Terrell Edmunds intercepting Luton again, the defense made sure Jaguars never had a chance to take advantage of Pittsburgh’s offensive sluggishness.

Imperfection, a Feature, Not a Flaw

Hardly. That final touchdown padded Pittsburgh’s point margin, making the game look more lopsided than the 27-3 score suggests. But it doesn’t matter. In Ben Roethlisberger’s words, the Steelers are “…not chasing perfection in terms of a perfect 16-0. We’re chasing Lombardis.”

So in other words, you’ve got a team with a 10-0 record with both room for improvement AND the self-awareness that they must improve? That’s a pretty good place to be.

2 thoughts on “The “Imperfections” in Steelers 27-3 Win over Jaguars are Feature, Not a Flaw”