The COVID-19 outbreak that has now delayed the Steelers and Ravens game twice continues to spread unabated. First,we learned that several Ravens players had tested positive. NFL doctors assured us the spread had stopped. Then, we learned that those players included Lamar Jackson. NFL doctors again assured us the spread had stopped.

Again, NFL doctors reassured us the spread had stopped. Now James Conner and Matt Canada have tested positive, with Danny Smith out “sick.” So aren’t related to the outbreak in Owings Mills, but Willie Snead’s positive test most certainly is. 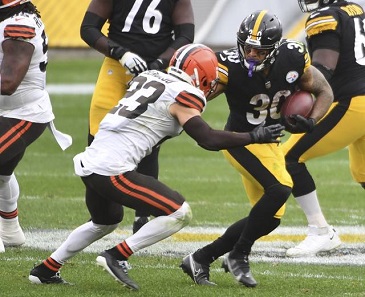 As of the morning of Monday November 30th, at least 12 Baltimore Ravens players and 8 team staff have tested positive for COVID 19. Baltimore has 18 players on its COVID-19 reserve list – not counting Willie Snead. Out west, Denver Broncos had all 3 quarterbacks ineligible due to COVID-19 concerns.

Credit the NFL’s Roger Goodell, the NFLPA’s DeMaurice Smith and their medical staffs and logistics teams for getting the 2020 season this far. The nature of the game and the size for the NFL make “socially distancing” almost logistically impossible.

But what every epidemiologist has predicted has come true: As colder temperatures force more people indoors, people breathe more recirculated air and more people get infected with COVID-19. Physics, biology and Earth Sciences conspire to give COVID-19 its perfect breeding ground.

That means what has gotten the NFL to Thanksgiving won’t get it through December and through the playoffs.
IF the NFL is to make it to the Super Bowl without the type of months-long-delays that hit MLB, the NHL and NBA its going to need to adopt the latter two league’s strategy of bubbling. Clearly, the idea of moving and isolating the entire NFL within NBA-style COVID pods in a select group of 2-3 cities isn’t realistic, as Amy Trask pointed out in The Athletic last spring.

Building in-city COVID pods would be a challenge, but it should be doable.

For the record, yours truly is neither a Dr. nor a logistics specialist, so I don’t offer this as an expert opinion. But in my mind, an in-city COVID pod would look like this:

Would this be complicated? Absolutely. Would it be possible to create 32 “air-tight” pods that completely insulated the NFL COVID contagion? No, it would be impossible. Would this cause hardship and disruptions for players whose families live with them in Pittsburgh and the other 31 cities? Certainly. Would the NFLPA accept this? Not without a fight they wouldn’t.

If that is clear then it is also clear that the NFL’s current virtual bubble strategy that worked well enough in August through October, is no longer sufficient.

Let’s repeat the stat from above:

The cost and practical implications building 32 COVID pods cannot be underestimated. NFL players are not going to isolated inside a Red Roof Inn. But the NFL’s 2019 annual revenue was pegged at 8.1 billion dollars. And given unemployment rates and the general state of the economy, something tells me the NFL could find hotels willing to be bought out for several weeks, and staffers willing to isolate.

NFL players need to get their kids to school, prepare meals, and help with homework just like any other parents. That’s hard enough under normal circumstances. Perhaps one solution would be to give families the option to join players inside the COVID Bubble.

Back in June when the NBA was looking at bubbling, Yahoo! Sports columnist Doug McIntyre brought up one concern voiced by Dr. Dara Kass to argued: “You’re literally taking a bunch of virile athletes and saying, ‘You will be celibate for six weeks.’” Doesn’t sound like a lot of fun.

In fact, it sounds downright impractical. Until you consider that Ohio Class nuclear submarines typically operate on a 70 day patrol cycle. So until recently, all male submarine crews routinely survived 70 tours under the water in the ultimate COVID pod for decades – and for a lot less money and glory than their NFL brethren.

If they did it, then I’m sure Ben Roethlisberger, Chase Claypool, Diontae Johnson, Cam Heyward and T.J. Watt will too.

Pivoting to in-city COVID pods is a disruptive, drastic measure, but these are drastic times.