Taken from the grade book of a tardy teacher whose students flunked the multiple choice section but aced the essay part of the exam, here is the Steelers Report Card for the 2020 win over the Ravens at M&T Bank Stadium. 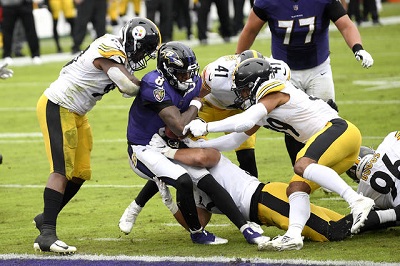 Quarterback
Ben Roethlisberger struggled during the first half, completing just four passes, although he protected the ball. In the second half, Ben Roethlisberger did what he does best – freelancing, and led the Steelers on 3 touchdown drives. Finishing the day going 21 of 32 for an economical 182 yards passing and 2 touchdowns. Grade: B+

Running Backs
James Conner had a tough day, only rushing for 47 yards on 15 carries, and added 3 catches for 13 yards. James Conner did score a critical, go ahead touchdown. Anthony McFarland had 1 carry for 1 yard, but he did well in avoiding a loss. Jaylen Samuels was targeted twice and did not catch a pass. Grade: C

Tight Ends
Eric Ebron only caught 4 passes for 48 yards, which looks pedestrian, but his touchdown was critical to getting the Steelers back into the game. Later, he made two drive-sustaining catches on series that ended with touchdowns. Grade: B

Wide Receivers
Chase Claypool made 5 catches for 42 yards, including a picture perfect route on the final go ahead touchdown. Claypool also fumbled the ball, which is becoming a recurring issue. Ray-Ray McCloud and Diontae Johnson each made 1 catch for 6 yards, but he drew a pass interference penalty on a touchdown drive. James Washington was targeted once and drew a pass interference penalty. Grade: B

Offensive Line
Baltimore sacked Ben Roethlisberger twice and hit him 6 times, but Big Ben seemed under duress less than he would for a typical Ravens game. The line also gave up several tackles for losses and run blocking remains a challenge. Grade: B-

Defensive Line
Stephon Tuitt was a monster, earning AFC Defensive player of the week for his 2 sack 3 tackles for a loss and 3 quarterback hits effort. Cam Heyward had 5 tackles and had to leave the game twice due to injuries. Tyson Alualu left the game early, and was replaced by Isaiah Buggs who struggled against the run early on. But Buggs made good on the penultimate drive of the game, stoning Lamarr Jackson twice, forcing a fumble on his second try. Grade: B 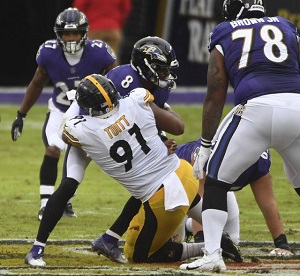 Linebackers
Robert Spillane continues to impress, leading the team in tackles, defensing 2 passes, and making a pick six that was a critical difference maker for the team. Bud Dupree had four tackles and a strip sack that wiped at least 3 points off the board for Baltimore. T.J. Watt “only” had a sack and 5 QB hits. Vince Williams had five tackles and recovered a fumble. Alex Highsmith made a leaping interception to start the 2nd half, which helped turn the game for Pittsburgh. The linebackers had a part in allowing Baltimore’s massive rushing total, but their critical plays at critical moments were essential. Grade: B+

Secondary
Joe Haden had 7 tackles and Steven Nelson had 4, while Cam Sutton and Justin Layne had 2 tackles apiece as did Terrell Edmunds. The real star of the unit was Minkah Fitzpatrick whose pass defense proved once again he was worth every bit of the 1st round pick the Steelers gave up to get him. Grade: B+

Special Teams
Ray-Ray McCloud had a respectable day on kick returns and returned 1 punt for 5 yards. The Ravens kick returns were nothing special, but they did have a 15 yard punt return. Jordan Berry had a spare 42.2 yards per punt, but he did boom off a 48 yard punt and a 56 yard punt. Chris Boswell was perfect on extra points. Grade: B

Coaching
The Ravens have a tough defense that figured to test Pittsburgh’s offense. In the first half, they shut the Steelers down easily. But Randy Fichtner made the necessary half time adjustments. It might not have been the greatest show on turf, but 21 2nd half points on the road after such a rough outing is nothing to sneeze at.

In the last 8 quarters, the Steelers have gone from orchestrating a blow out in their first two tries, getting blown out in their next four, and rallying in their second 2, coming out victorious. Never at any moment has panic been evident in Pittsburgh’s play. That’s a credit to coach Mike Tomlin. Grade: B 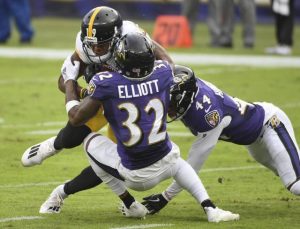 Unsung Hero Award
He hasn’t seen the end zone since September and he has yet to post a 100 yard or 10 catch game. That didn’t change against the Ravens, but this player make drive sustaining, combat catch after combat catch and for that JuJu Smith-Schuster wins the Unsung Hero Award for the Steelers win over the Baltimore Ravens.