Football is grounded in physics. Chuck Noll opined that the purpose of training camp was to teach players to use their bodies as projectiles. In his book, A Steeler Odyssey, Andy Russell argues that success and failure in football often comes down to subtle changes in angles, stances and alignments that are often lost on even the most educated fan.

But in the Steelers 26-10 win over the Cincinnati Bengals at Heinz Field, Pittsburgh proved two things:

Lets look at how the men in Black and Gold delivered their lesson in math and physics. 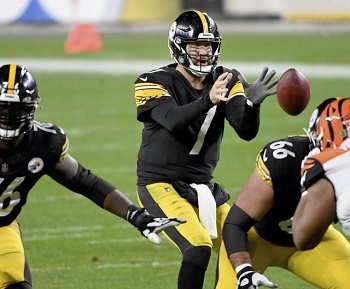 Football fans love statistics. Before the age of Direct TV, streaming and even shows like ESPN’s NFL PrimeTime, reading the stats in the paper at the breakfast table was as close as some citizens of Steelers Nation got to the game itself.

Walter Abercrombie and Frank Pollard both have better career rushing averages than Jerome Bettis. Who would you rather draft for your all time Steelers team? Case closed. If I grabbed the stat sheet from the Steelers-Bengals game and told you that:

You could easily concluded that Cincinnati came out of Pittsburgh with an upset. But you’d have been wrong, because those numbers just don’t add up.

A Few Numbers that Offset the Ones Above 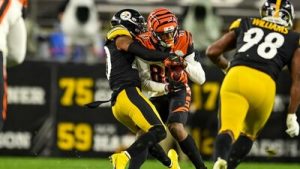 The numbers above are at once accurate and imprecise because they’re counter balanced by statistics like these:

Take those stats, and look at them alongside the first set of numbers and it paints a picture of Pittsburgh perhaps pulling out another barn burner thanks to a little Minkah Magic magic.

But once again, you’d come away with the wrong image. This game was a blow out instead of a barn burner, and that’s because one number is more important to Pittsburgh than any other.

The two BIG known unknowns for the Steelers heading into 2020 were how would COVID-19 impact the team, and how well would Ben Roethlisberger rebound from surgery. 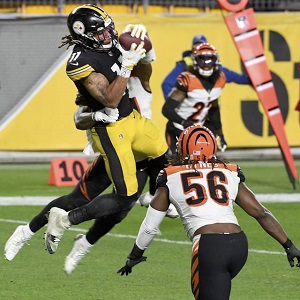 Ben Roethlisberger was unable to practice, due to potential exposure to COVID-19, but it Big Ben’s performance was the definitive difference maker for the the Steelers.

No, Ben Roethlisberger was not perfect. His long passes remain a work in progress. A couple were too short, a few more flew too long, and a few failed to escape the line of scrimmage without getting batted away.

But that really doesn’t matter when you can:

All of that amounted to the Steelers going 4 of 5 in the Red Zone, while tacking on a Chris Boswell field goal on their other trip, in addition to two other Boswell scores from father out. Two other stats help complete number 7’s tale: Zero sacks and Zero interceptions.

7 is the numeral that means so much more than any other number to the 2020 Pittsburgh Steelers.