The Pittsburgh Steelers may already be AFC North Champions, by the time you sit down to read this article. That depends on what the Browns do on Sunday against those hapless Giants, of course. 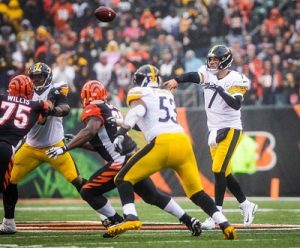 Even if they aren’t after Sunday’s action, chances are, the Steelers will clinch the title once they likely have their way with the Bengals at Paul Brown Stadium on Monday Night Football. If that doesn’t happen, and Pittsburgh loses its third-straight game to fall to 11-3, well, it’s going to happen eventually, right? I mean, it better.

The only way the Steelers can’t win the division is by losing out and Cleveland winning out. Losing out for Pittsburgh would mean a five-game slide heading into the playoffs. I don’t know about you, but I wouldn’t like the Steelers’ chances of doing anything at that point.

Winning the division has become so commonplace for the Steelers and their fans, it’s barely even acknowledged anymore when it does happen. Nobody notices when the players and coaches wear their post-clinching division title memorabilia that usually consists of t-shirts and baseball caps. Speaking of which, do you still buy that stuff as a fan? Do you go to your local outlet malls and snatch up all the division championship shirts, hats and banners you can get your hands on, or do you at least do so online?

I’m not telling anyone how to spend their money, but you should. OK, the economy is bad, right now, and I can certainly understand if you don’t want to splurge on that AFC North gear. Fine, but you should still appreciate it. You should cherish it.

It’s really amazing when you examine the histories of a lot of franchises and discover just how rare divisional titles are. There are thousands of fans out there who would give anything to be able to buy some division champions memorabilia.

You should, too. For one thing, it really is an accomplishment. Think about it. As a team prepares for its upcoming season, the first thing it wants to do is be better than its divisional opponents. Doing so means your program is better than your closest rivals. The first step for every organization each year is to capture its division. The Steelers are on the verge of doing that.

Also, it’s just really cool to watch a team win something, anything.

And if that’s not a good enough reason, celebrating a Steelers’ AFC North title shows that you’re not taking things for granted. It’s true that the standard is and will always be a Super Bowl. However, you never know when that won’t be the standard any longer. You never know when a true fall from grace will hit any franchise.

The Steelers will once again run the AFC North. Time to celebrate.