The Pittsburgh Steelers defeated the Indianapolis Colts 28-24 at Heinz Field to improve their record to 12-3. That descriptive statement is correct. But it is hardly accurate as it fails to capture the decisive nature of the victory, including:

The Steelers already had a playoff spot locked up, and the Browns cooperated by losing to the lowly Jets, thus they were ceding the AFC North to Pittsburgh anyway. But in beating the Colts, the Steelers showed something new, something they hadn’t shown all year.

The question the Steelers still must answer is: Was it just a blip or was it a true take away? 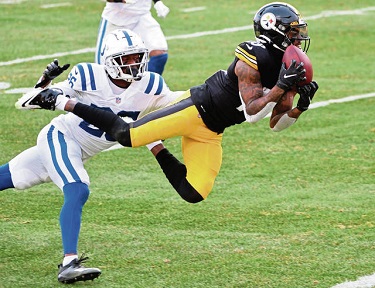 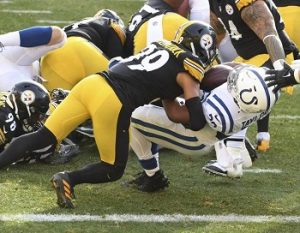 Sure, T.J. Watt forced a fumble that Mike Hilton recovered. And while it was hardly a sure thing that Pittsburgh would convert that fumble into points on the board (see Benny Snell getting stuffed), James Conner did get the Steelers in the end zone to start the 2nd quarter. But by that time Jordan Berry had already punted 3 times and the Colts already had a touchdown.

Other than that it was ugly.

Sure, a penalty negated a Nyheim Hines 68-yard run that almost certainly would have resulted in another touchdown for the Colts, but Indianapolis was getting the ball back to start the 2nd half and a 28 to 7 lead only seemed to be a question of “When” and not “If.”

When in Doubt, Turn to the Terrible Towel…

Sometimes the stars line up. It was on December 27th 1976 against the Baltimore Colts that Myron Cope unleashed the Terrible Towel. The talisman that binds Steelers Nation was born.

Originally, the Terrible Towel was only supposed to be for playoff games or special regular season games where Cope would put out his call for the Towel. Could it awaken the Steelers from their slumber? Without Cope around to put out his “official” call would it help the Steelers “Snap out of it?”

So yours truly went to his bottom drawer, opened the ziplock bag that holds the Terrible Towel that my mother bought for me at Pittsburgh’s South Side Hospital just after saying goodbye to my grandfather for the final time. The Terrible Towel was deployed.

Second Half: The Old Mr. Roethlisberger Roars to Life

The Steelers started the 2nd half as they’ve started every other quarter, by throwing it. But this time Ben Roethlisberger was connecting on his short routes. Then after 3 straight completions, Ben Roethlisberger rifled the ball out towards Chase Claypool with a pass that flew 45 yards in the air. For much of the year the best result of pass attempts like this has been to draw a pass interference penalty.

But the Steelers drive sputtered as Pittsburgh failed to convert on 4th and one. But the defense held and on Pittsburgh’s very next snap, Ben Roethlisberger fired a bullet that traveled 50 yards to Diontae Johnson for a 39 yard touchdown. The Steelers were in it again.

But against the Bills and then against the Bengals the Steelers offense had shown spurts of life only to fall short.

Eight plays (and two pass interference calls) later Roethlisberger was hooking up with Eric Ebron from five yards out to cut the Colts lead by three. The Steelers look a more methodical approach to their next drive, burning 4 and a half minutes off of the clock. James Conner actually got in a double digit run and two double–digit receptions.

But before they reached the Red Zone, Ben Roethlisberger let it rip to JuJu Smith-Schuster from 25 yards out and another touchdown strike. There were seven minutes and 38 seconds left in the game, and the Steelers were up 28-21, enjoying their first lead in 10 quarters…

…Could they hold it?

The revival of the Steelers offense in the 2nd half will dominate the conversation by the virtual water coolers in Steelers Nation Monday morning.

I’ll let the film review delve into the nuances of the 2nd half adjustments that Keith Butler made, but several players stepped up at critical times in the 2nd half. 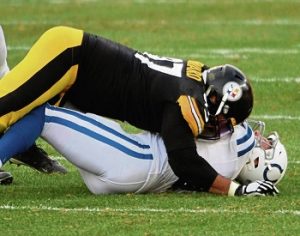 The Colts had their way with the Steelers defense in the first half, and they began the 2nd half marching down the field again. But once they got in the Red Zone, Stephon Tuitt sacked Philip Rivers on third and 3 forcing a field goal.

Its never good to be down 24-7, but that sure beats 28-7. Particularly when your defense can pitch a shut out. Which is what Pittsburgh’s defense pitched on the Colts next 5 drives:

The Colts scored on their first drive of the 2nd half. They gained 52 yards in just over a minute on their last. In between they netted 45 yards on 14 plays that amounted to 3 punts and an interception.

Those numbers add up to a Steelers defense that delivered.

Can Steelers Sustain This?

Pittsburgh’s comeback wasn’t perfect. Ben Roethlisberger threw at least two passes that should have been intercepted. The running game remains AWOL. They couldn’t kill the clock. Nonetheless, just like back in like September, October and November it was enough to win.

But it is incorrect to say that in the 2nd half Steelers suddenly looked like their former 11-0 selves. Incorrect for a good reason:

The question is: Was Ben just coaxing the last few long-balls that his arm has left in it or has Roethlisberger reestablished a rhythm with his deep ball?

Time will tell. But one thing is certain today:  If Ben Roethlisberger has recovered his deep ball, then then the Steelers are again legitimate Super Bowl contenders.