Taken from the grade book of a teacher who fears it might be time for his star pupil to graduate to his “Life’s Work” and is in no mood to offer a Christmas reprieve here is the Steelers Report Card for the 2020 loss to the Bengals a Paul Brown Stadium. 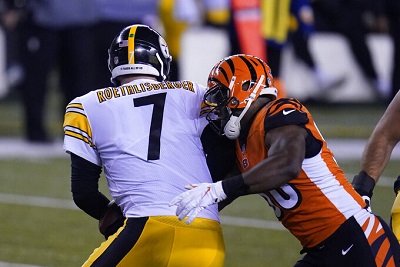 Quarterback
Ben Roethlisberger played what were perhaps his worst 30 minutes of football during the first half against the Bengals. Officially he went 7 for 16 for 19 yards 1 interception and one fumble. But there were 2 if not at least 3 more interceptions the Bengals should have had. Worse yet, Roethlisberger was tentative, timid and unsure. He played much better in the 2nd half, but by then the Steelers were doomed. Grade: F

Running Backs
Benny Snell was perhaps the lone bright spot to come out of the Bengals game. Snell carried 18 times for 84 yards. There were times, such as the 4th and 1 that he converted, where he made yards where none were to be found. Most impressively was the determination and drive he showed. Both Jaylen Samuels and Anthony McFarland had 1 catch and 1 carry each, doing what was asked of him. Grade: B

Tight Ends
Eric Ebron left the game with an injury, leaving the tight end duties to Vance McDonald. McDonald’s block was critical to the Claypool catch and run that sparked the 2nd half mini-rally. He didn’t have any balls thrown his way, but showed up at other times in the blocking game. Grade: C+ 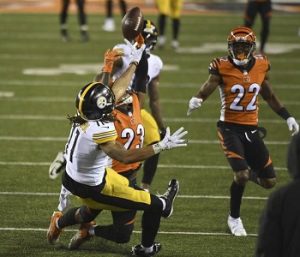 Wide Receivers
Diontae Johnson had a strong game, logging 8 catches for 59 yards including a 23 yard touchdown. Chase Claypool put the Steelers back in the game with his 2nd half 37 yard scamper. JuJu Smith-Schuster only had 3 catches and he did fumble one of them, putting the Bengals firmly in control of the game. James Washington was targeted 3 times with no catches, but that’s hardly his fault. Grade: B-

Offensive Line
Statistics can be deceiving. Just look at the rushing numbers and it seems like there was some quality run blocking going on. At times there were. But when the Steelers needed it the most, it wasn’t there, particularly in the 3rd quarter when someone missed a block and Benny Snell got dropped for a 2 yard loss on 3rd and one. Cincinnati’s lone sack might make it seem like pass blocking was good, but Ben Roethlisberger was hit 9 times as Alejandro Villanueva and Chukwuma Okorafor were dominated.

Now we know why Ben Roethlisberger has been throwing it so quickly all season…. Grade: F

Defensive Line
The Steelers run defense ran hot and cold against the Bengals. Stephon Tuitt was strong in the pass pressure game netting a sack and 3 quarterback hits but could have been stronger against the run. Tyson Alualu had 5 tackles. Grade: C+

Linebackers
Stripped of 3 of its starters and its primary backup the Steelers linebackers did what they could. Which wasn’t enough. T.J. Watt had a sack, 1 QB hit and 3 tackles for losses. He played like a man possessed early in the game. Alex Highsmith got a pressure on Watt’s sack. Inside linebackers Avery Williamson led the unit with 7 tackles and Marcus Allen had 7. This unit struggled to contain Ryan Finley and that was a difference maker in the 2nd half. Grade: C- 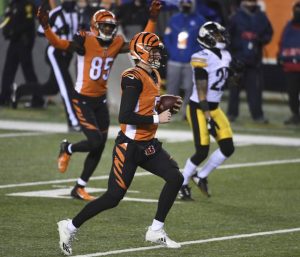 Secondary
The Bengals were 4-14 on third down conversions, which is a credit to the Steelers secondary. Steven Nelson deflected 2 passes while Joe Haden deflected one. The secondary did a good job of keeping the Steelers in the game as long as they could. Unfortunately, it wasn’t long enough. Grade: B

Special Teams
Ray-Ray McCloud’s kick and punt return numbers might not dazzle, but he seemed to regain the confidence he’d been lacking since the fumble against Washington. Steelers punt coverage was solid. Chris Boswell made all of his kicks and Jordan Berry had a fantastic night. Grade: B

Coaching
The Steelers offense had more turnovers than it did first downs in the first half. A damning statistic if there every was one. Randy Fichtner’s offense might be predictable but honestly, predictability or schematics weren’t at issue against the Bengals.

Keith Butler’s defense did well to keep the score to 17 points – OK that doesn’t account for the quality of opposition – in the first half, but got snookered in the 2nd half time and time again by Ryan Findley. 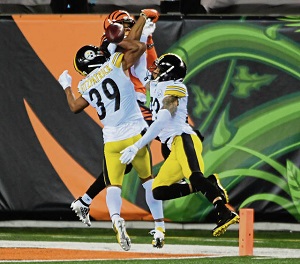 Unsung Hero Award
Ryan Findley was killing the Steelers – and with only 7 completions to his name. Possession downs would start with the Steelers defense smelling blood in the water, and they would end with Ryan Finley burning the Steelers with his legs. One player put a stop to it, and it was the same player who deflected a touchdown pass and the same one who led the team in tackles and for that Minkah Fitzpatrick wins the Unsung Hero Award.