Taken from the grade book of a tardy teacher who is forced to give out 2 “Fs” to formerly star pupils, here is the Steelers Report Card for the 2020 loss to the Bills in Buffalo. 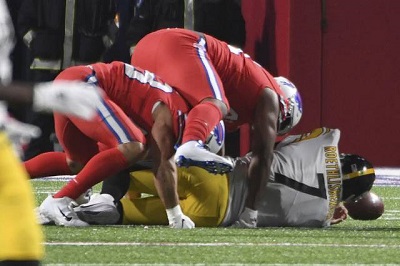 Quarterback
Ben Roethlisberger was hard on himself after the game. As he should be. To be clear, Roethlisberger remains the offense’s best player by far. But, as was wont to do earlier in his career, Ben sometimes tries to do too much by forcing things. Such was the case both interceptions against the Bills, which shifted momentum to Buffalo and killed any comeback chances. Grade: F

Running Backs
James Conner, Benny Snell and Jaylen Samuels couldn’t break the 50 yard mark – together. Yet each had some respectable runs and Samuels had 3 catches. Frankly, the backs showed they can run when they get room. Grade: C-

Tight Ends
Eric Ebron promptly dropped his first pass, a throw that would have converted a third down. He was 50/50 on his other throws and was impressive in hauling in the two point conversion. Vance McDonald had 2 passes thrown his way but did not have a catch. Grade: C-

Wide Receivers
JuJu Smith-Schuster caught 6 of 7 balls thrown his way and again proved he is the units most reliable receiver. Diontae Johnson dropped two balls and got benched, but came back to make plays in the 2nd half. James Washington only caught two passes but one was for a touchdown and he was open on the 2nd interception. Chase Claypool had 3 catches on 6 yards. Grade C-

Offensive Line
To be fair, the Steelers lost not one, but two starters during this night and suffered another injury that pressed Jerald Hawkins into action leaving the team with only 5 health lineman at one point. Its tempting to factor this into group’s grade. Tempting, but wrong. The Steelers run game and line did show a little spunk when Kevin Dotson was in, but other than that the group got manhandled. Ben Roethlisberger was only sacked once, but that came on the first third down of the 2nd half.

Long a team strength, against the Bills this group stood out a glaring weakness. Grade: F

Defensive Line
Tyson Alualu saved the Steelers sack streak becoming the only player to log a sack. Cam Heyward played as a one-man wrecking crew for the first half but got double teamed effectively in the second. Stephon Tuitt could have picked up the slack, but he did not. Grade: B- 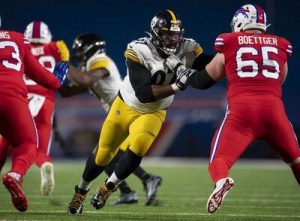 Linebackers
Once a strength of the defense, T.J. Watt was the only starter from opening day and Watt had an off night although he did defect a pass and hit the QB twice. Avery Williamson and Marcus Allen led the team in tackles. Alex Highsmith had a tackle for a loss and a QB hit but has yet to make good on the flashed he showed before becoming a starter. Ulysees Gilbert III saw his first real defensive action. Given the deck dealt to them, the linebackers turned in an above the line performance. Grade: C

Secondary
Steven Nelson was on fire during the 2nd half as he defected 3 passes. Mike Hilton made a interception and helped force a fumble that Cam Sutton recovered. Terrell Edmunds led the secondary with 8 tackles while Minkah Fitzpatrick missed a key tackle of Stefon Diggs. The secondary did an excellent job of containing Diggs and Allen in the 1st half. The 2nd half was a different story, but overall their play was above the line. Grade: C+

Special Teams
Ray-Ray McCloud’s fumble seems to have spooked him as his decision to return the first kick was a mistake. His second return was solid. The Bills kick and punt returning were hardly a difference maker in the game, but they enjoyed more success than you’d like to see. Chris Boswell made his lone extra point attempt and Jordan Berry’s punting was above the line. Grade: C 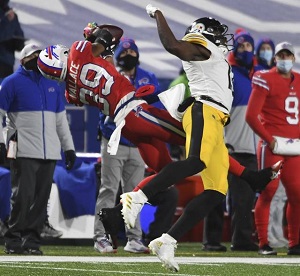 Coaching
Playing 3 NFL games in 12 days is taxing and will challenge the management skills of even the best NFL staff. While its popular to take aim at Mike Tomlin (Mexican blogger Carlos Ortega titled a Spanish-language post “Do your F___ing Job) and his coordinators, this site won’t join that frenzy, at least not fully.

Keith Butler had to take the field on the road against one of the hottest QB-WR duos without four of his starters and 1 primary backup. The Steelers did an excellent job of containing them for one half. Certainly, that changed in the 2nd half, but by holding them to 20 non-turnover assisted points, Butler’s boys gave the Steelers a chance to win.

Clearly the unit remains below the line, across the board. But how much of this is Randy Fichtner’s fault? The Steelers offensive line is a liability plain and simple, and that ripples through every other position. It’s comforting to think that Russ Grimm and/or Mike Munchak could come back and coach up and forge the current front five into a formidable unit, but such fancies are fantasy. This is an aging and injured unit.

Save for a handful of plays, that was missing Sunday night. While it Fichtner would be foolish to try to re-invent the wheel he could be more creative.

During the 29 minutes the Steelers were in control of the game. The pick six changed the tone and tempo of the game, and the 2nd interception killed comeback chances, but responsibility for those errors does not rest with the coaches. Grade: C