If you are a Steelers fan who is used to “experts” telling you that you don’t know what you’re talking about, you may have been confused as to why the team kept on trying to grind it out with an ineffective short-passing game during its recent three-game slide. 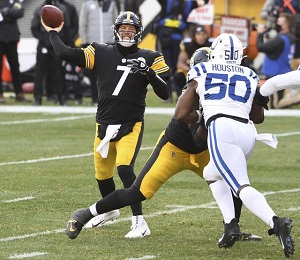 The short-passing attack, one that had clearly been figured out by opposing defensive coordinators, was a bone of contention with just about everyone who watched and covered the team the previous month or so heading into Sunday’s game against the Colts at Heinz Field.

Even while head coach Mike Tomlin, offensive coordinator Randy Fichtner and quarterback Ben Roethlisberger were stating that execution was the problem, it appeared that scheme and predictability were the real culprits.

Throughout the first half of Sunday’s showdown against the Colts, Pittsburgh’s offense continued to try to execute its short-passing game vs. yet another defense that didn’t seem all that interested in adhering to social distancing.

“Why aren’t they changing anything,” you may have been screaming at your television, as the Colts opened up a 24-7 third-quarter lead. In fact, you may have no longer had a television following Pittsburgh’s pathetic four attempts to score after securing a first and goal from the one.

But, just like that, as if the Steelers were Rocky to Indianapolis’s Apollo when the former switched back to a lefty in the 15th round of Rocky II, the passing game began to open up. Roethlisberger started to go for the deep pass and hit receiver Diontae Johnson for a 39-yard score.

There were more deep throws — including one that led to a defensive pass interference penalty — and everything began to feel different. Roethlisberger’s arm didn’t look so lifeless. His supposedly injured knee didn’t seem so injured. In fact, he even moved around in the pocket a time or two.

Tony Romo, the now famed color analyst for CBS’ number one announcing crew, even mentioned that the Colts’ defenders were starting to back off. They could no longer dare Roethlisberger to beat them with intermediate-to-deep passes because he was doing precisely that.

The Steelers’ 17-point deficit had transformed into a 28-24 victory, complete with an AFC North crown that looked like a mere formality weeks ago before that puzzling slide began.

There was much speculation as to why the Steelers were so reluctant to move on from their short-passing attack that had proven to be quite successful early in the year before it no longer wasn’t.

We may never know for sure. But we do know a problem when we see one. NFL head coaches are fond of telling us that football is a simple game, that it’s not rocket science. Maybe that’s why we get so angry when a simple solution isn’t explored.

The Steelers did in the second half of Sunday’s game what so many fans had been insisting that they must do to get the offense moving again–and it worked.

Take a bow if you’re a Steelers fan who is reading this. Football isn’t so complicated, after all, and the answers to problems are often as simple as they seem.