From the grade book of a teacher crossing his fingers that his struggling students are rebounding as finals approach, here is the Steelers Report Card for the win over the Colts. 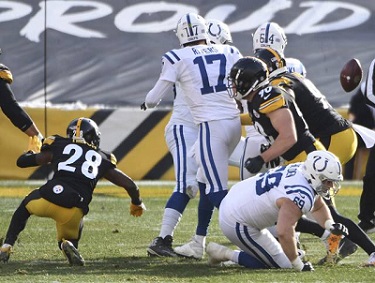 Quarterback
At the half, Ben Roethlisberger had completed just over 50% of his passes for less than 100 yards. After intermission Roethlisberger let it rip 23 of 29 passes for 244 yards, including touchdown passes of 25, 34 and 39 yards. Those deep balls fueled a stunning turn around that lifted the entire team and, if sustained, will make the Steelers a championship contender. Grade: A

Running Backs
Twenty yards rushing. That was the Steelers total for the game. That includes two victory formation kneel downs, a 2 yard sweep, six Benny Snell rushes for a net zero yards and 5 James Conner runs for 20 yards and a touchdown. As has been the case too often this season, there was nowhere to run. James Conner did catch 5 of 5 passes that were thrown his way, completions which sustained drives. Grade: C

Tight Ends
Eric Ebron caught 5 of seven balls thrown to him including the Steelers 3rd touchdown. Vance McDonald caught one pass for 5 yards and could be seen throwing quality blocks. Grade: B

Wide Receivers
Diontae Johnson continues to be a work in progress dropping a pass early and running the wrong route just before the first half ended. But he atoned, burning the defense for a spectacular 39 yard touchdown and turning in a strong day. Chase Claypool re-emerged, coming up with a big catch that stretched the field and changed the tempo. James Washington had two catches for 20 yards. The leader of the group JuJu Smith-Schuster had 9 catches for 96 yards on 13 targets including the go ahead touchdown. Grade: A- 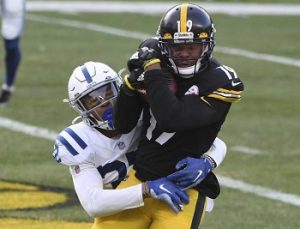 Offensive Line
So the Steelers rally included a return to road grading for the running game an diary writing for the quarterback, right? Not quite. During the first half the running blocking was atrocious. There was some improvement, on Kevin Dotson’s side, but nothing to rave about. Both of Roethlisberger’s deep strikes came out fast but he did have time to throw in the 2nd half. The line was above the line. Grade: C

Defensive Line
The Steelers rally started with Stephon Tuitt’s sack of Philip Rivers. Cam Heyward ended their first drive of the 4th quarter with a sack of his own on a drive when he and Tyson Alualu set up the 3rd and long by stuffing Jonathan Taylor. The stats for this group were fine, but what stands out is the plays they made when it counted. Grade: A-

Linebackers
T.J. Watt set up the Steelers first score with a strip sack and added another tackle for a loss and two more QB hits for good measure. Vince Williams returned and logged 5 tackles. The real star of the unit? Avery Williamson. He stuffed Johnathan Taylor at the goal line for a 1 yard loss and then sacked Philip Rivers on the Colts next possession after the Steelers touchdown. Grade: A 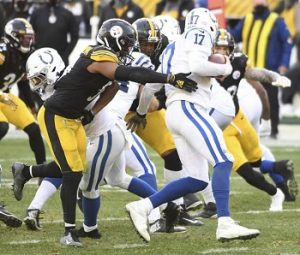 Secondary
Minkah Fitzpatrick not only led the team in tackles, his coverage also set up Heyward’s sack and he deflected a late ball. Steven Nelson had a strong game although a PI penalty converted a 4th down for the Colts. Joe Haden gave up a touchdown while Terrell Edmunds and 5 tackles. The real star of the show was Mike Hilton who returned a fumble to the 3 and picked off Philip Rivers. Grade: B+

Special Teams
Matthew Wright was fine in relief of Chris Boswell and Jordan Berry punted well. Ray-Ray McCloud return averages weren’t exceptional, but he seem to recover some of the confidence he was lacking since his fumble against Washington. The Steelers kick coverage was OK but punt coverage was a bit shaky. This trend cannot continue in the playoffs. Grade: C

Coaching
At this point in his tenure, what you see is what your get from Randy Fichtner. You’re not going to see hand-crafted Joe Gibbs-like game plans nor will you see Kyle Shanahan’s innovations. His play calling might be predictable. Generally that’s a bad thing.

Against the Colts it did not matter as the Steelers were able to out execute. The turn around authored by the Steelers defense was just as important. Every time they had to, Keith Butler’s boys step up and made plays in situational football. They were able to do so because guys were where they needed to be.

Facing the most punishing losing streak of since the four game skid of mid-2016 many were calling for Mike Tomlin to make changes. After a putrid first half change had to be tempting. But at halftime Mike Tomlin told CBS his plan was to “get the guys on the grass going.” 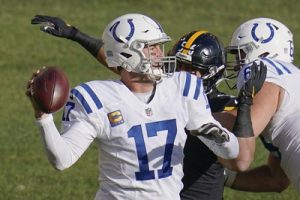 Tomlin did that, and those players delivered, snapping a 3 game losing streak in the process. Grade: A-

Unsung Hero Award
Splash plays. Bit hits. Stats. Those drive conversations about defensive football. But defensive players often make impact that isn’t covered on the stat sheet. Twice Philip Rivers faded back to pass in attempting a comeback and twice his pass flew errant due to pressure. Both times it was Alex Highsmith on the pass rush and for that he wins the Unsung Hero Award for the win over the Colts.