The Steelers were bounced in Hindenburg Meets the Titanic fashion from the wildcard round of the playoffs in a 48-37 loss at the hands of the Browns last Sunday evening at Heinz Field.

The first heads to be handed to the public on a pike were offensive coordinator Randy Fichtner, offensive line coach Shaun Sarrett and secondary coach Tom Bradley.

Randy Fichtner had long-since worn out his welcome with Steelers fans, many of whom have never met an offensive coordinator that they wanted to like for more than a year. As for Sarrett and Bradley? Likely collateral damage.

But coaches aren’t the only ones to blame for the Steelers’ quick and painful playoff exit. No, folks want the players to be held accountable, as well. 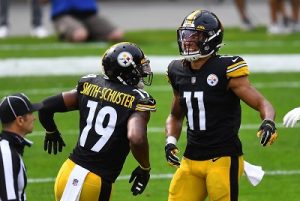 Namely, receivers JuJu Smith-Schuster and rookie Chase Claypool, both of whom had some less than flattering things to say about the Browns before and after the postseason matchup.

Smith-Schuster made headlines for stating that the “Browns is the Browns” in a press conference with the media in the days before Cleveland came to town. This was seen as ripe bulletin board material and something to really rile those Brownies up something good. As for Claypool, following the Browns’ victory over Pittsburgh, he took to TikTok and said: “Bad loss, but the Browns are going to get clapped next week, so it’s all good.”

Doesn’t matter to many. Claypool is being labeled a sore loser and, like with Smith-Schuster, some are suggesting he’s showing signs of becoming the next Antonio Brown–if not in terms of talent, certainly in terms of being problematic.

Most of all, the Steelers’ talkative young receivers are seen by many as a symptom of a poor locker room culture.

Isn’t it always about a lack of leadership and/or a toxic culture? Many fans and media members can’t wait for Smith-Schuster, a pending free agent, to leave town. In case this sounds familiar to you, they were just as eager to see Brown and Le’Veon Bell exit Stage Left.

I’m sure it won’t be long until Claypool wears out his welcome in Pittsburgh, thanks to one too many social media posts that don’t show total dedication to the game of football.

I’ll tell you how many, an infinite amount because there’s really no such thing as perfect locker room chemistry.

Of course, you do, that’s why I’m writing this article. OK, fine, but if that was the case, how do you explain the total dedication both Smith-Schuster and running back James Conner displayed in the weight room all offseason? You remember the social media posts from the summer where they seemed to be all about improving their bodies so they could be better players in the fall and winter.

How about quarterback Ben Roethlisberger, who not only spent the entire spring and summer rehabbing his surgically repaired right elbow, but he also appeared to lose about 20 pounds of Big Ben fat in the process?

People must remember that this Steelers organization has employed many interesting characters throughout its illustrious history. Jack Lambert once said that quarterbacks should wear skirts. Greg Lloyd was called the meanest guy in football. Joey Porter used to prance around with his abs exposed before games and pick fights with any opposing players who were willing. Guess what? All three played for teams that won Super Bowls or were at least contenders.

The post-Brown and Bell Steelers were seen as a bunch of great guys, especially when they started out the 2020 campaign 11-0.

The Steelers didn’t lose to the Browns because they had a cultural problem. They lost because of a talent and/or game-plan problem.

Unfortunately, it’s much easier for the fans and the media to accept the former than it is the latter.