I have to admit, I’m starting to understand the Blond Bomber’s beef with the Steel City.

To be clear, I have always and will always defend Terry Bradshaw as a player against those who charge that he was “Dumb” or “just an average quarterback lucky to be on a good team” (if you really believe that, Google “60 Prevent Slot Hook & Go” and tell me an “average” quarterback could make that throw.)

But Bradshaw’s whining about how Chuck Noll or Steelers fans treated him has always fallen flat with me. 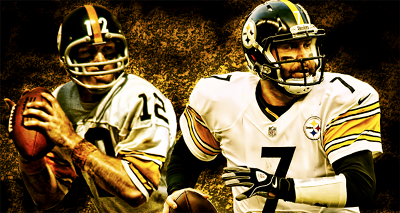 There’s no doubt that Ben Roethlisberger is past his prime. Once his signature, he struggles with the long ball. He’s in decline and the only question is can this decline be managed/slowed long enough for the Steelers to squeeze a seventh Lombardi from Number Seven out of his arm?

But what I don’t get is the way some fans have turned on him. This tweet provides a perfect taste of what I’m talking about:

You go from an average to below average QB in Ben to a top 5 QB in Watson.

So based on his body of work in 2020 Ben Roethlisberger is now “average” or “below average?” Really? Let’s put that hypothesis through a simple exercise.

Can you imagine, Tommy Maddox, Charlie Batch, Byron Leftwich, Dennis Dixon, Bruce Gradkowski, Landry Jones, Michael Vick, Mason Rudolph or Devlin Hodges – or all the other quarterbacks that have thrown a pass for the Pittsburgh Steelers since 2004 — starting a playoff game by throwing 3 interceptions in one quarter?

I can, particularly if Diontae Johnson is bouncing letting catchable balls off of his hands towards waiting defensive backs.

Now, can you imagine any of those players going 38-51-3-1 for 435 yards for the rest of the game? In his prime, Vick might have, but by the time he became a Steeler? No way. Neither could any of the others.

Moreover, this statement of fact references Ben Roethlisberger’s current capabilities, not Big Ben of yesteryear. That that’s the rub with treatment Ben Roethlisberger is getting from wide-swaths of fans in Steelers Nation.

Nor are arguments that suggest Ben Roethlisberger has and will continue to sabotage the offense. Here’s a perfect “Ben is hostile to the running game” quote for Steel City Insider’s message board:

As long as he is around they will not have a run game he is the reason why we lost the 2 playoffs game. 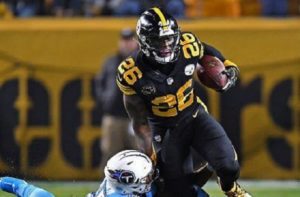 Le’Veon Bell in 2017 vs. the Titans. Photo Credit: Yahoo! Sports

True, Ben’s turnovers represented critical mistakes in both playoff losses. But Le’Veon Bell logged 16 rushes against Jacksonville, and the Steelers defense was AWOL at turn-key moments in both defeats. So Ben was hardly “the reason why we lost the 2 playoff games.”

This “Ben hates the run” mentality extends to the regular season as well as evidenced by another comment from the same message board:

I’d only be willing to do this if he agreed to run an offense that DOESN’T throw 600 passes a year with at least 350 of them short of the first down line. I don’t want to watch this ridiculous offense he has insisted on running since 2018.

Objectively, he’s got the numbers going for him. But the key phrase above is “offense he has insisted on running since 2018.” Really? If Ben was “insisting” on running a pass-heavy offense, then why was James Conner was on track to have a 378 touch season until it became clear that the Le’Veon Bell holdout would be permanent?

The Steelers abandonment of the run in 2018, 2018 and 2019 for that matter was driven by necessity not desire. Ben Roethlisberger may not have objected to this, but it certainly wasn’t his decision.

This post began by referencing the rift between Terry Bradshaw and the Steelers. That’s a one sided rift if there ever was one. If Terry Bradshaw ever decided to “come home,” fans in Pittsburgh and Steelers Nation at large would embrace him with enough enthusiasm to put the Prodigal Son’s father to shame.

That brutal treatment left a scar on Bradshaw’s soul that he’s unable heal because he’s unwilling to heal it. But the scar never should have been made in the first place.