The Pittsburgh Steelers closed their 2020 season with a last-minute 24-22 loss to the Cleveland Browns. The loss left the Steelers regular season record at 12-4 and sent the Browns to the playoffs.

Throughout his tenure, Mike Tomlin has refused to claim “moral victories” even if they may have been justified. Nonetheless, there are some definite positives Pittsburgh can pull out of this loss heading into the playoffs. 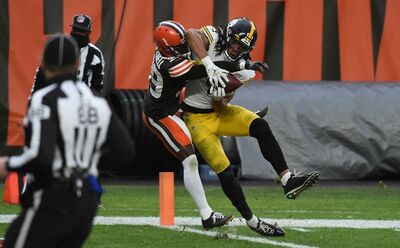 The storylines were set heading into this game. For the Steelers very little was at stake. Cleveland, in contrast was playing for all of the marbles, as a win meant the playoffs, but a loss would keep them out. Knowing that, Mike Tomlin opted to “Air Mail” his players to playoffs, keeping Ben Roethlisberger, Cam Heyward, T.J. Watt, Maurkice Pouncey, Terrell Edmunds and Chris Boswell out. 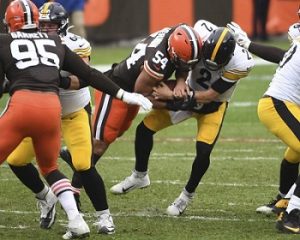 Playing against a team fighting for its post-season life, the game evolved pretty much as you’d expect it to for the first 45 minutes.

The Cleveland Browns touchdown came on the first play of the 4th quarter, which gave them a 26 to 9 lead. At that point, with 15 minutes separating the Steelers from a playoff rematch, the smart money says pull the remaining starters and hope to avoid injury.

But Mike Tomlin chose to live in his hopes and not his fears.

Mike Tomlin once declared, “As long as we’re keeping score, I play to win.” It’s one thing for a coach to state such a credo; it is an entirely different thing for players to meet the challenge. The scoreboard says the Steelers didn’t meet the challenge, but they certainly didn’t flinch. 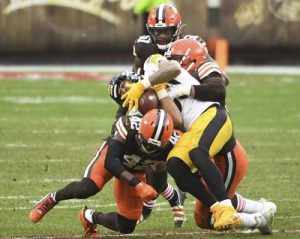 On the ensuring drive:

Next the defense got into the act. One of the keys to the Browns’ second half success was Baker Mayfield’s scrambling. But on 3rd and 3, Stephon Tuitt stepped up and sacked Mayfield, setting up a 4th and 7. The Browns went for it, but came up short.

On the next drive Mason Rudolph did it again, lighting up the Browns with a 47 yard completion to Diontae Johnson. A six yard run by Anthony McFarland and a 2 yard shovel pass from Joshua Dobbs to Vance McDonald set up Mason Rudolph’s 2 yard touchdown to JuJu Smith-Schuster, narrowing the score to 24-22.

The Steelers failed on the two point conversion. Just as their on sides kick failed. Just as the Steelers defense failed to keep the Browns from running out the clock.

As Mike Tomlin declared following the game, the Steelers simply “didn’t make enough plays” to win. However, there were any number of positives that Pittsburgh can pick out of this game:

Some of the take aways above might raise an eyebrow at first glance. Even if you take away 47 yard run, he still had a 4.7 yard average. While that’s not an average the Steelers can allow in the playoffs, his remaining 61 yards and Kareem Hunt’s 3.7 suggest that the Steelers can contain Cleveland’s running game.

Pittsburgh’s own running game hardly authored anything to write home about, but each of the running backs showed they can make plays when holes are there.

And what’s most encouraging about this game is that the Steelers played with an intensity that suggested that they were fighting for a playoff spot — which is exactly attitude this team needs.