The Steelers 2020 season finale against the Browns contained an unexpected wrinkle: Joshua Dobbs. 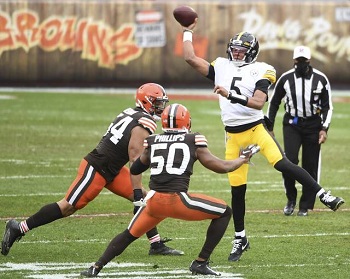 But his understudy Joshua Dobbs also saw action, rushing the ball several times and completing a number of passes (OK, they were shovel passes.) This was a wrinkle that no one was expecting, and given that the Steelers offense is desperate to do anything to breathe life into its running game, deploying Dobbs was a welcome sign.

Yet most pundits wrote this off as head coach bluster designed to give opposing defensive coordinators a little something extra to think about. The reasoning is that Mason Rudolph clearly earned his stripes as Ben Roethlisberger’s number 2 going into the playoffs. Ergo, there’s no way the Steelers would give Joshua Dobbs a helmet over Mason Rudolph.

This is one case where the conventional wisdom is probably right. But it doesn’t have to be. Keeping 3 quarterbacks active isn’t the radical notion that it sounds like. In fact it used to be reasonably common. In fact, keeping three quarterbacks dressed and on the active roster was a critical component of the Steelers first serious attempt at 1 for The Thumb.

3 Quarterbacks, the 1995 Steelers and Slash

Dressing 3 quarterbacks was a fundamental and intentional part of the 1995 Steelers offensive strategy. It started rather unintentionally on opening day when injuries to both Neil O’Donnell and later Mike Tomczak forced Jim Miller into the game for one play (where he threw a long pass that was the equivalent of an interception.)

It was one of the rare times when 3 Steelers quarterbacks threw passes in the same game, and it was the only time that phenomenon occurred in that season.

And while Mike Tomczak wasn’t getting a lot of love, Kordell Stewart was enjoy the heyday of the “Slash Era.” At the time NFL game day rosters limited teams to 45 members, plus an emergency 3rd string quarterback.

Whether Jim Miller continued to suit up as the team’s emergency 3rd stringer while Kordell Stewart was a wide receiver is a question best left to NFL archivists. It doesn’t really matter, because today teams are allowed to dress 46 active players.

For what its worth, and for those of you boning up on your Steelers 3rd string quarterback trivia, the last time times 3 Steelers quarterbacks threw passes in the same game came against the Browns, most recently in the 2008 season finale and prior to that in the 1999 season opener.

If the Steelers do defy the odds and dress Joshua Dobbs alongside the other two quarterbacks, let’s hope that there’s no cause for QB number 2 to throw a pass outside of garbage time.