The Cleveland Browns eliminated the once Pittsburgh Steelers to the tune of 49-37 on a bleak night at Heinz Field.

The game ended at just before 2:00 am here in Buenos Aires, and with a long work day looming I’m not sure when I’ll be able to get the post-game analysis up. Those are always a challenge following night games, and other events could over take us.

So here is some Rapid Reaction: 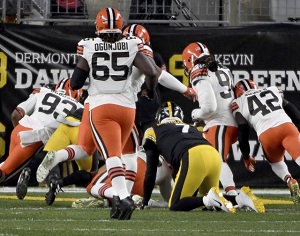 Ben Roethlisberger can do nothing after the opening snap flies over his head. Photo Credit: Chaz Palla, Tribune Review

Seriously (well, not really), after that the Pittsburgh out score Cleveland 37 to 20. And after the Browns went up 35 to 7, the Steelers held the the Browns to just 13 points. So remember that boys and girls, if you get into an NFL playoff game, its probably not a good idea to spot your opponent four touchdowns.

This game hinged on turn overs, make no mistake about it. But those turnovers were one sided. The Browns got them (or were handed them) in droves, while the Steelers came up with none. The Steelers have been a take away machine for much of the past two seasons, but when it counted the most they came up with naught.

And it wasn’t just lack of turn overs. T.J. Watt made some nice plays behind the line of scrimmage, but never really got to Baker Mayfield. Minkah Fitzpatrick couldn’t work any of his magic. It is amazing to think that Nick Chubb only had 76 yards, because he seem to run at will.

JuJu Smith-Schuster led the Steelers receivers with 13 catches for 157 yards and 1 touchdown. It is a shame that JuJu’s first and fourth seasons with the team are book-ended by bad playoff losses. This is one player who deserved more.

Ben Roethlisberger threw four interceptions. One bounced of Diontae Johnson‘s hands and most certainly should have been caught. Another was tipped at the line of scrimmage — a chronic issue all season long — and perhaps isn’t quite his “fault.”

But the other two were ugly. And there was another “should have been intercepted” ball.

Beyond that, Ben Roethlisberger’s arm looked good. He threw better downfield than at any other point in the season. He’s indicated he wants to keep playing, but he’ll count upwards of 40 million against the salary cap next year.

It will likely be Ben’s choice as to whether he returns or not, but one has to wonder if Art Rooney II isn’t going to be tempted to “officially” begin rebuilding.

That’s all for now folks. Check back in a day or so for our full analysis. Thanks to everyone who came and read this season.