The Pittsburgh Steelers are banking big time on rookie wide receiver Chase Claypool in the playoffs. Mike Tomlin makes no bones about it. After the Steelers narrow loss to Cleveland, Tomlin declared:

It was our intention to feature him a little bit today. We wanted him to have that type of rhythm and that type of confidence in his playmaking ability going into January ball. We were able to check that box.

The Steelers plan appears to be working. After breaking records in September, and October, Chase Claypool’s numbers began to drop in November. During the Steelers 3 game December losing streak, the rookie who’d scored 4 touchdowns in 1 game against the Eagles had all but disappeared from the Steelers offense.

It always seems to happen about that time when your normal college season would be over. About 11, 12 games, that’s what you’re used to. That is what their bodies are used to. I won’t say that he hit that wall, but I will say there’s something there that you have to work yourself through. I saw it, you can see it.

Mike Tomlin declined to admit that Claypool had hit the rookie wall, but conceded that coaches had been trying to help him avoid hitting that wall by limiting his snaps. Claypool’s explosive performances against the Colts and Browns show that the Steelers plans paid big dividends in the at the tail end of the 2020 regular season.? 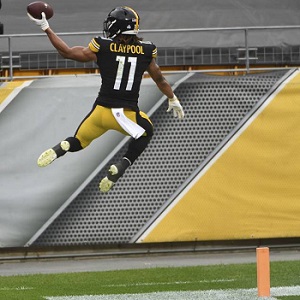 Playoff history of past Steelers rookie wide receivers suggests this will be difficult….

History of Steelers Rookie Wide Receivers in the Playoffs

To wit, at least 4 Steelers wide receivers have won Super Bowl rings as rookies – but you wouldn’t know it from their playoff statistics.

Here you’ve got playoff statistics from 20 Steelers rookie wide receivers drawn from 41 games over a 43 years period. Passes were thrown from Hall of Famers like Terry Bradshaw and Ben Roethlisberger to “How was he a first rounder?” Mark Malone, to middle of the roaders like Neil O’Donnell, Kordell Stewart and yes, Bubby Brister. 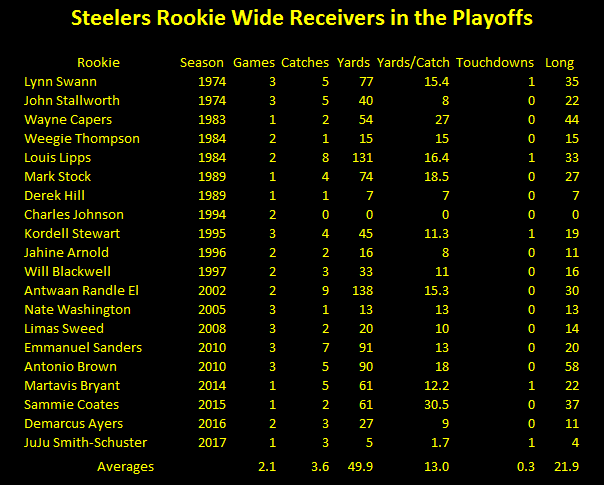 Based on those averages, if the Steelers were to play in two playoff games, Chase Claypool can be expected to catch between 3-4 passes for just under 50 total yards with his longest reception clocking in at 13 yards and his chances scoring a touchdown are minimal.

Times When Statistics Fail to Tell the Full Story

While Lynn Swann’s playoff rookie playoff contributions were pretty good, you’d never guess that John Stallworth was ALSO a future Hall of Famer if his rookie playoff stats were all you had to go by. On the flip side, Mark Stock logged 4 catches for 74 yards for the 1989 Steelers. Even if you can forgive his critical drop in the playoff loss to the Broncos, the rookie’s future looked bright. 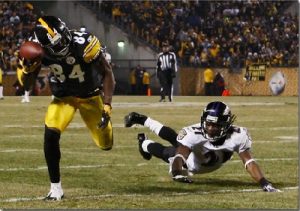 Antonio Brown catches with his helmet. Photo Credit: Behind the Steel Curtain

Sammie Coates is another player who enjoyed a false flash in the playoffs. He looked good in the Steelers playoff loss to the Broncos in 2015 but a year later he was dropping would-be game changers in the AFC Championship loss to the Patriots.

Nate Washington converted a critical 3rd down on the Steelers first scoring drive against the Broncos in the 2005 AFC Championship – and then kept Domonique Foxworth from intercepting a few plays latter. Likewise, Antonio Brown’s 5 catches for 90 yards look pretty good for a rookie in 2010.

However, “pretty good” fails to communicate the reality that Brown made the most critical catches in the Steelers divisional win over the Ravens and then again in the AFC Championship win over the Jets.

There are of course two Steelers rookies who followed strong regular seasons who continued their success in the playoffs. Louis Lipps had 45 catches for 860 yards and 9 touchdowns as a rookie for the 1984 Steelers and then went on to make 8 catches for 131 yards in the ’84 Steelers two playoff games.

As a rookie Antwaan Randle El had 47 catches for 489 yards and 2 touchdowns, and in the playoffs he had 9 catches for 138 yards – in addition to his 99 yard kickoff return for a touchdown the 2002 Steelers Wild Card win over the Browns.