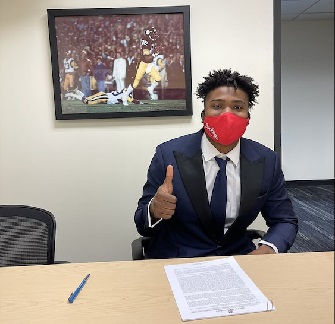 Haskins made 7 starts in 2019 and 6 and 2020 and compiled a 3-10 record, throwing 12 touchdowns and 14 interceptions. But Haskins was known to be a project coming out of college, and his high draft status was largely a product of pushing for Daniel Snyder for Washington to take the player over his coaches’ objections.

Growing pains are nothing new for rookie NFL quarterbacks (just look up Terry Bradshaw’s early career passing stats) but Haskins created problems for himself off the field.

As the Washington Post’s Les Carpenter detailed, Haskins was chronically late to meetings, refused to study his playbook, had poor practice habits and was seen breaking COVID-19 protocols by partying maskless.

In a nutshell, he’s the type of player the Steelers normally avoid. So why is he in Pittsburgh?

To put the Dwayne Haskins in context, remember two things about Mike Tomlin:

Quick trivia question: Where was Joey Galloway’s NFL home between New England and Washington? If you guessed the Pittsburgh, you guessed right. The Steelers signed him at the tail end of 2009, although Galloway never played a game in Black and Gold.

Plax ultimately joined the Jets, but returned to Pittsburgh in mid-2012, catching a touchdown for his final NFL pass. Word was that when Mike Vick got out of prison Tomlin wanted to do the same but got overruled by the Rooneys.

When Charlie Batch broke is collarbone at St. Vincents in 2008, he brought former first rounders Daunte Culpepper and Byron Leftwich to Pittsburgh for workouts immediately. Lefwich of course stayed.

A year later, when Ben Roethlisberger suffered a concussion against Kansas City and Charlie Batch broke his wrist, the Steelers worked out (but did not sign) former first round pick Patrick Ramsey.

Devlin Hodges of course came to Pittsburgh as nothing more than a camp arm, and one who earned his shot via the Steelers rookie mini-camp. As Mark Kabloy suggests in The Athletic, Haskins isn’t anything other than a camp arm.

His arrival likely does spell the end of Devlin Hodges time in Pittsburgh, but signals nothing about the Roethlisberger era, the Steelers plans for Mason Rudolph and the 2021 NFL Draft, nor does it preclude Joshua Dobbs’ return.

Mike Tomlin has taken a flier on a “camp arm” albeit with a bit more upside then most “camp arms,” but he’s still a “camp arm.”