Steelers’ tight end Vance McDonald announced his retirement from the NFL on Friday after eight seasons.

Vance McDonald, who came to Pittsburgh in 2017 via trade, was a second-round pick by the 49ers in the 2013 NFL Draft. Big, fast and athletic, McDonald seemed to fit the mold of that Rob Gronkowski-type tight end that had become all the rage, the kind of matchup problem that had given the Steelers’ defense fits for years. 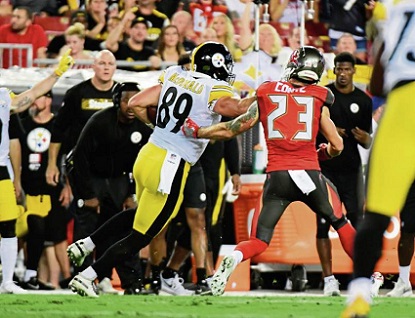 The emergence of George Kittle, a fifth-round pick in 2017, made Vance McDonald expendable to the 49ers, while less-than-desirable performances by their tight ends during that summer’s training camp made McDonald desirable to the Steelers. It also didn’t hurt that McDonald had just recently inked a deal with the 49ers and would be under Pittsburgh’s control for a few years.

Unfortunately for McDonald and the Steelers, he never quite realized his full potential during the entirety of his eight-year career but especially his four seasons in Pittsburgh.

Sure, he showed flashes, like on Monday Night Football in Week 3 of the 2018 campaign when he stiff-armed Buccaneers’ defensive back Chris Conte into retirement in the Steelers MNF win. Here it is again:

Steelers TE Vance McDonald has announced his retirement from the NFL. His stiff arm of Chris Conte will live on forever.

After an injury-plagued first season with the Steelers, McDonald’s stiff arm actually signaled his best year in 2018, as he caught 50 passes for 610 yards and four touchdowns. He and Ben Roethlisberger seemed to be developing the kind of rapport that the veteran quarterback had been longing for from a tight end since his buddy, Heath Miller, retired a few years earlier.

Sadly for McDonald, Roethlisberger’s elbow injury prevented the on-field relationship with his quarterback from developing further in 2019. As for 2020? With only 15 catches for 99 yards, McDonald was barely a factor in the passing game, even with a returning Roethlisberger, who seemed to fancy a new tight end, free agent pick-up, Eric Ebron.

It’s sad for the Steelers that McDonald never morphed into their version of Gronk, but kudos to him for beating the odds.

According to the NFLPA, the average length of an NFL career is 3.3 years. Not only did McDonald beat the odds on the field, but he also beat them in a financial sense. According to Spotrac.com, McDonald made over $28 million during his eight-year career. That’s not chump change, especially for a profession that often chews people up and spits them out before they can start making any serious money (by NFL standards, of course).

McDonald never made his mark in the NFL. He wasn’t an all-time great. He wasn’t even an all-time Steeler. But he’s now 30 years old and, assuming he makes sound financial decisions moving forward, is set for life.

It’s hard to say what motivates NFL players when they first get into the league, but it’s the kind of business that is always looking to replace them if they can’t meet a certain standard. It’s highly competitive. It’s dog-eat-dog. Most don’t last. Even fewer profit from it.

Vance McDonald did both during his eight seasons in the NFL. Good for him. Good for any player who has that kind of career.