Ben Roethlisberger will be back with the Pittsburgh Steelers in 2021. The suspense is over. Nearly two months after the Steelers 2020 season ended in Hindenburg Rescues the Titanic fashion in defeat the Cleveland Browns, Pittsburgh has answered its biggest off season question. 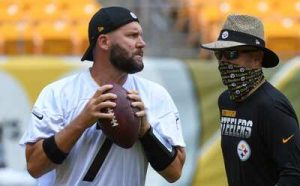 After he met with Art Rooney II, his agent Ryan Tollner confirmed:

Ben Roethlisberger will indeed be back as the #Steelers starting QB this fall. Just connected w/ the two-time Super Bowl winner’s agent, Ryan Tollner, who said this: pic.twitter.com/YnWRWwkbeM

For fans looking at that 3 interceptions in less than a quarter against the Browns left wondering, “Why bringing him back?” another game against Cleveland offers clarity.

The Case for Bringing Back Ben

As I’ve confessed before, when I first learned that injuries might force Terry Bradshaw to retire, I was happy, because my older brother had told me “Bradshaw was ‘old.’” To an 11 year old, “Young” meant automatically better.

I remember seeing a few games after the fateful declaration, but didn’t see too many after that. But I do remember tuning into one a few years later. The 1987 season opened with Mark Malone and Chuck Noll logging their second upset of Bill Walsh and Joe Montana.

Channel 11 in Baltimore was showing the game in week 2, a Steeler road game against the Browns. The picture in the DC suburbs was fuzzy as it arrived from Baltimore, but I didn’t need HD quality to understand the disaster.

I tuned in in the fourth quarter. The Browns were winning, but only by 20-10. It was just in time to see Mark Malone toss an interception right to Clay Matthews, which Matthew returned for a touchdown. I think, I can’t be sure, but I think that was his 4th on the day. If I’m right, he quickly threw another with the Browns converted into another touchdown. 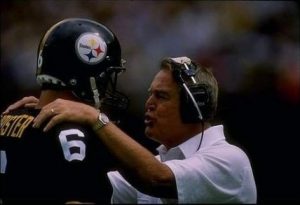 Bubby Brister to the rescue? Right? Ah, no. The Bubster threw an interception of his own and went 1-5 in mop up duty. He also got sacked.

7590 days elapsed between Terry Bradshaw’s last pass to Calvin Sweeney and Ben Roethlisberger’s first pass to Plaxico Burress. No, not all of those days were as bleak as that afternoon at Cleveland Municipal Stadium, but the moral of the story is clear: If you have a franchise quarterback, you ride him as far as he will take you.

Yes, There is a Risk in Roethlisberger Returning

The risk of a Ben Roethlisberger return is real. One Mexican blogger spelled it out:

I don't believe Ben can perform at a high level under pressure when it truly matters anymore. He didn't in playoffs in 2017 and he didn't in 2020. He dug holes he couldn't overcome. I respect his career, I've never insulted him, but I don't believe he can pull it off again.

What we saw at the end of 2020 might be the best Ben can bring with the new arm that’s attached to his 39 year old body. Even if he can get comfortable with his arm’s “bionics” (to borrow Jim Wexell’s term) the Steelers will still need to:

But Ben Roethlisberger has obviously indicated he’s willing to give up enough salary to let the Steelers try to do that. Mason Rudolph has shown real upside. (And please, the Steelers can and will do what is needed to keep in in Pittsburgh in 2022.)

Mason Rudolph might represent the future, the here in the present Ben Roethlisberger still represents the Steelers best shot at going to the Super Bowl in 2021.